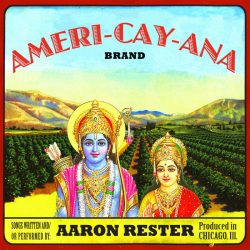 The last we heard of Chicago based songwriter Aaron Rester was back in 2009 when we, along with the wider music community were hailing a possible new pioneering Americana breakthrough. The Lost Cartographers were country infused with funky guitars and an inclination if not to break new ground then to follow different paths to the same destination with intriguing results. Which brings us to Rester’s new solo project and the distinct feeling that he is seeking to get back to basics but again with very original results.

It’s easy to imagine that Rester might have had this album on the back burner for some time. Being in a band with two other singer-songwriters might become a little cramped. Toes can get stepped on, three can become a crowd, but Americayana is a statement of intent which burns with the fires of another age, and not just the one when albums were knocked out in bedrooms and publicised on myspace (it feels like yesterday).

The roots here go back even further of course, with one commentator making the comparison between Willie Nelson and The Ramayana. This is where things become slightly complicated. The Ramayana – an ancient Sanskrit tale of epic proportion and South Asian origin which pre-dates Christ is the inspiration behind this country infused home brew of Americana. Not something you find yourself saying every day but there, It’s said. Alongside vinyl effects and Dobro strumming on opener A Small Sacrifice, Rester proceeds to tell his alternative Wild West parallel reality of the Prince Rama and his quest to rescue his beloved wife. There’s a homegrown Americana spirit to the way Rester tells his stories, a tumbleweed whiskey-soaked country kick that shows panache and stays true to the many Hindus that consider the Ramayana to be a sacred text.  Americayana is quite the journey.

Cowboys and Indians In A Bygone Age