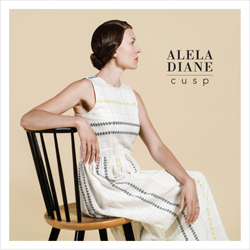 Since her last album in 2013 (About Farewell) Alela Diane has remarried and given birth to two daughters. We mention the daughters as Cusp is, above all, an album about motherhood, even the album cover can be seen as an update on Whistler’s Mother. Diane sings of her own experiences as a mother while some songs are written from a mother’s perspective. She’s moved on from her early days when she was linked to the freak folk movement, Cusp is an assured and mature set of songs.

While she was writing the bulk of the album during a three week artist residency in snowy Oregon, Diane broke a fingernail, normally an inconvenient but insignificant issue. This led her to compose using a piano with the result that many of the songs are piano driven with only a few featuring her on guitar, the result being that she at times recalls the tragic songwriter Judee Sill – no bad thing. Her earlier sound is still in there, listen to ‘Émigré’, a song written after seeing the press coverage of a drowned Syrian toddler, ‘The Threshold’ or ‘Buoyant’, all haunting meditations with the same hushed beauty of her debut album, The Pirate’s Gospel, but the piano adds some degree of grandeur to the remainder of the songs.

‘Albatross’ opens the disc with Diane singing about the sense of separation from her daughter as she goes off on tour. It’s an ethereal song suffused with sadness, the string and horn arrangement emphasising the loneliness she experiences, a desolate beauty not a million miles from Scott Walker’s late 60’s existential dramas. Much of the album is in a similar vein, her voice at times glorious while the arrangements are immaculate, the mild maelstrom of sound on ‘Yellow Gold’ an excellent example while on ‘So Tired’  Diane’s voice ebbs and flows wonderfully as the strings create a fuzzy sense of half awakedness. Of note is the song which pays tribute to Sandy Denny noting that the legendary singer died shortly after the birth of her daughter with Diane cleverly weaving the old blues number, ‘Motherless Children’, into her empathetic story.

The album title relates to Diane’s personal experience when giving birth to her second daughter when complications led to her becoming seriously ill. This balance of life and death, the cusp of the title, is given its ultimate expression in the excellent ‘Ether & Wood’, a song which is a dreamlike reverie, Diane a spectral presence but able still to feel her child’s presence as she sings, “Next thing I knew her spirit called she took shelter in my womb and I felt her tiny feet kick me from the inside.”

Cusp is a powerful celebration of motherhood, perfectly poised to command attention in the current climate of female rebuttals against the male hegemony. As Diane says, “This album is my version of women’s’ work.”

A haunting and powerful exploration of motherhood