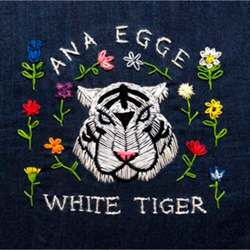 Brooklyn based but with a somewhat nomadic background, Ana Egge is one of those songwriters who seem to hover around the edge of the mainstream. She gets great reviews but she’s certainly not a household name even in the most dedicated of Americana infested households. Her album with The Stray Birds, ‘Bright Shadow’, did cause a bit of a buzz, perhaps down to that trio’s reputation but we can safely say here that ‘White Tiger’ is a much more multi faceted affair than the folky infused ‘Bright Shadow’, bursting as it is with imaginative arrangements adorned with horns and synths.

Egge is a wonderful singer, her voice at times reminiscent of a young Lucinda Williams although less bluesy and with a warmer edge to it. The panoply of the songs’ arrangements however recall another singer, Cindy Lee Berryhill, who, with her Garage Orchestra, moved on from her anti folk beginnings to a more elaborate delivery. There are several moments here where Egge can be simple and folksy as on the wonderful delivery of John Hartford’s ‘Tall Buildings’ (with Billy Strings sharing the vocals) or on her own ‘Last Ride’, a haunting fiddle infused song with a slight country rock chug to it. She’s at her best in this vein on ‘Western Movie’ which quotes Scorsese’s ‘Alice Doesn’t Live Here Anymore‘, a film which speaks to Egge’s own childhood and which is given a deliciously laid back rendering with a slowly picked guitar guiding the way as the band lazily evoke hot summer afternoons.

Elsewhere she is more adventurous, the opening ‘Girls, Girls, Girls’ visiting Lou Reed territory but with a skip in its step as the generous horn section floats along. ‘You Among The Flowers’ pulses with slight electronic beeps and whatnots and ‘Dance Around The Room With Me’ has a propulsive drum beat driving the song along with a mildly demented keyboard solo midway through. ‘I’m Goin’ Bossa Nova’ meanwhile is a somnabulant twirl of a song which sounds like Astrud Gilberto backed by Portishead. On the title song, written as an encouragement to a friend going through a tough time, Egge manages to deliver a thoughtful and delightful guide to overcoming obstacles with the band wrapping the song in a soothing comfort blanket.

‘White Tiger’ is an excellent album. Warm and enveloping with Egge’s voice and lyrics outstanding, it deserves to be heard far and wide.