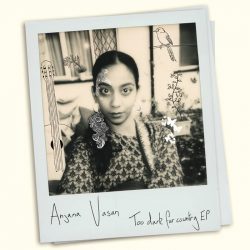 asan is an actress who now demonstrates a new side to her talents as a singer / songwriter with a really impressive four track debut EP ‘Too Dark for Country’. This is essentially an acoustic folk record with the essence of blues and country on show. Vasan has a strong and powerful voice which she uses to full effect on each track.

Key Lime Pie is the most playful and upbeat on show wheras Oh Sister bemoans a perceived failure on the part of women to stand up for themselves “ain’t it always about a man” being the main refrain. Outsider Blues deals brilliantly with the subject of racism, managing to show the full hypocrisy of racists whilst at the same time injecting humour and pity. There is also an almost Ella Fitzgerald moment in the delivery of The Ballad Of Richard Morgan (Song For Bessie Smith) with a nod to Bob Dylan with the line “my broken heart can be found out on highway 61”. A fantastic debut.