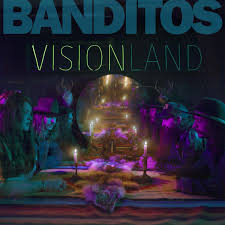 Bursting forth from the grooves with the dynamic opener ‘Fine, Fine Day’ this album announces its presence with brio and verve. A fantastic piece of Stooges like driving rock so breathless that the vocals appear to be struggling to keep up. Second track ‘Strange Heart’ is completely different; a gothic noirish delight with some keening vocals set over an insistent sharp backing with some delightful swirling guitar flourishes. A Southern delight that would not have been out of place soundtracking the first True Detective series. And then it’s goneand the title track hoves into view on the back of a curious piano sounding guitar.

‘Visionland’ follows the previous with its lead female vocals and there is psychedelia here as well as Joplin and Jefferson Airplane in its woozy charm. So far so very interesting. ‘Thick N’Thin’ drops the ball a touch with its fairly standard rock n roll vibe but ‘Healin’ Slow’ returns the quality and then some with a burning country torch song. Simple but very effective and very tastefully done. Similarly ‘When It Rains’ has a quiet authority in the mood created with its initially hushed vocals and sparkling guitar runs with their hints of Lady D’Arbanville.

This is a great album with some very strong tracks, this reviewer expects them to be a fantastic live proposition.