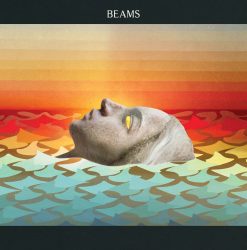 Toronto based band Beams, are, by their own, admission, a hard band to define musically. The songs are led by the vocals and banjo of Anna Mernieks and, while the banjo is ever present and brings a distinctive sound to the table, it is the punchy rhythms, jangling guitars and crashing drums that provide a lasting impression. So it is that despite mandolin, lap steel and singing saw joining forces with Mernieks’ banjo, the obvious route into bluegrass or country has been body swerved and the seven-piece band have produced a body of work that has a much harder edge.

Merniek shares vocals with Heather Mazhar on the majority of tracks and their excellent harmonies have a strong enough presence to compliment and thrive alongside this wall of sound. ‘Berlin, Teach Me To Love’ is a strong opening track, and provides the listener with a pretty good indication of what is to follow. The song ebbs and flows, the sparse and subtle workings of the banjo given only occasional prominence here in favour of catchy vocals, great guitar work and Mike Duffield’s relentless drums.  ‘Live In The Real World’ is, by contrast, a brilliant showcase for the banjo/mandolin. A constant and persistent riff drives this brilliantly infectious track; a song that drags the bystander onto the dance floor and must be a great favourite at live shows.

Being immediately followed by ‘Apartment In My Head’, another terrific track with a bit of everything thrown into the mix, the album feels as if it peaks here.  The next song, ‘Dreamcatcher’, brings a gentler, more pared back, reflective sound and, while, the pace soon picks up again with the excellent ‘Pull Of The Night’, the remaining songs don’t quite manage to live up to those blistering opening tracks.

Call it folk rock or psych folk the album is, like much that falls into the broad church that is Americana, a difficult one to pigeon hole. That said, it is an album that works on its own merits. Beams have delivered a distinctive and powerful sound that is worthy of attention.