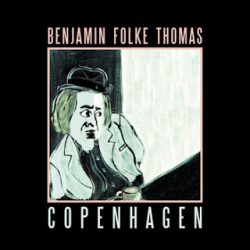 Thomas’ opening gambit Good Enough For Me sparkles with lyrical ideas and has a few sticky hooks thrown in. The first line Wish I could come down from this pedestal strikes the right tone somewhere between two other great Scandinavian cultural icons the Norwegian TV series “Dag” (highly recommended – it has a wonderful soundtrack) and the writing of Karl Ove Knausgaard. Both deal with existential angst in similarly entertaining ways. Good Friend Again only deepens this impression, This is the day I’ll start drinking again, I need something to cope with these avenues of shame. There’s a brutal honesty, even if it is only fiction – it’s far from romantic.

The blurring of autobiography and fiction that Knausgaard deals with and biography as source material and a new way to approach songwriting that Mark Kozalek has been experimenting with on recent Sun Kil Moon albums is present in many songs. Finn is especially relevant, filled with detail, a meditation with a lesson: Time flies by so fast, Spend it with the people you love functions like a chorus stumbled upon whilst improvising. It’s the story which is important – no verse/chorus/verse, the structure is open. The musical tools are also open. Thomas’ previous records have relied upon his fingerpicking but with songs like Bad News the front line is a drum machine and in the background electronic drones and synths hold sway.

The state of the world is as important as the personal. Hold On reflects the resentment of the political class whilst at the same time reburying Elvis, Michael Jackson and Jerry Lee Lewis. There’s also the redemptive power of love in Struck Gold and Copenhagen 30/6 along with the side of love that never allows for contentment on Safe and Secure. Finally on Gimme A Smile out comes the rippling fingerpicking and something approaching a standard song. Thomas has made a complex album that prods and pushes the listener into thinking about the songs as they unfurl. He’s positioned somewhere between Dylan, Cash and Kozalek – things are never quite simple and straightforward but there’s pleasure to be had from the journey.