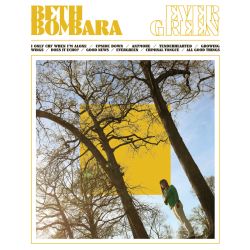 Michigan-born Beth Bombara is a relatively new name around these parts, though she’s released a couple of EPs and four albums prior to this one.  Judging by its contents though they should be well worth investigating because ‘Evergreen’ has ten excellent songs that blend contemporary folk and Americana to very good effect indeed, not to mention the great tunes and hooks she deploys to boot. The songs range from ‘Tenderhearted’, a wonderful paean to her husband, via the Stones-y rock’n’roll of ‘Good News‘ to the delicate ‘Growing Wings’ where her plaintive vocal recalls early Neil Young.

It’s clear that the well from which she draws is that of classic singer-songwriter and rock’n’roll from the late Sixties and early Seventies, with a nod to others similarly influenced like Tom Petty. Country-flavoured yes, but this is not music to be confined to that ghetto.  If you’re into Mr Young, The Burritos or the rockier end of the Laurel Canyon sounds then Beth Bombara is most definitely for you.

She brings the album to a close with ‘All Good Things’, a quiet and quietly heartfelt piano-driven lament at the state of the world and America in particular: “Do you get the feeling/that everything is broken/and every word that’s spoken/is lying through its teeth?” she starts before singing later on, “if this is great again/then where did we begin?”. It’s the only overtly political song on the album and she pretty much nails things with it, and together with the more personal pieces earlier, that makes this a fine outing.