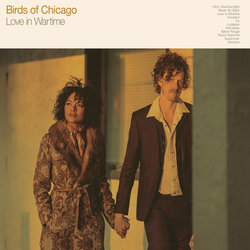 Not just in a titular sense, the Birds of Chicago’s latest album release has love as its subject matter running like a golden thread throughout the record – Allison Russell, the lead singer, reported to have said recently that any act of love is akin to “an act of bravery” in such troubled times. Founded in Chicago in 2012, but now based in Nashville, this musical collective centred on the husband and wife duo of Allison Rogers and JT Nero, have been quietly but assuredly building a fan base since, and ‘Love In Wartime’ is essentially a companion piece to their previous EP, ‘American Flowers,’ released  last year, the latter more country and fiddle influenced, and apparently not best suited to the mood of the new record, which is why it merited its own release.

Setting out their stall of recording an album which listeners can dance to is something they achieve with ease – pretty much right from the get go with ‘Never Go Back.’ It’s that soulful and funky it could be something recorded by the Brand New Heavies. Indeed, so hard to pigeonhole are Birds of Chicago that they achieve a successful melange of soul, rock, roots, blues-gospel and jazz funk across a raft of different songs on ‘Love in Wartime,’ with particular styles winning out on individual tunes. Certain songs such as the title track and ‘Try’ are more balladic and thoughtful, while first single from the album, ‘Roll Away’ with its handclaps, and the bass heavy ‘Derecho,’ are more uptempo in feel.

All the while the contrasting and alternating vocal styles of Russell and Nero are a highlight, particularly on the mid-paced ‘Lodestar’ which always threatens to burst into life but never fully takes flight. That’s not intended as a criticism. The fact it only thrums along without ever reaching the higher gear it always appears to have the potential for is just part of the creative tension which adds to the song’s intrigue.

The chemistry and understanding shared by the joint lead vocalists is demonstrated to greatest effect on the extended work out both singers get on ‘Try,’and the gorgeously affecting, ‘Superlover,’ its light banjo introduction and mellow vibe perfectly offset by the soaring and swooping vocal prowess of Russell in particular: “Tears of rage, tears of grief / From Inglewood to Nairobi / We need a super love.”

If nothing else on the album truly scales the heights reached by ‘Superlover’ then there’s still much to credit this love and life-affirming third major release. It’s also a record whose songs appear designed to fully flourish in a live setting – very much like the flowers described in ‘Lodestar’: “Now you’re fissile, opening like primroses reaching for the sun.”