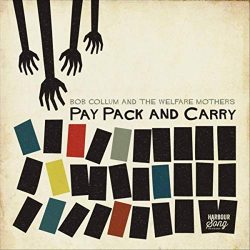 Bob Collum hails from Tulsa, Oklahoma, which is a pretty good place to come from if you’re a man who makes music in the Americana genre. But Collum has added an interesting twist to his back story by relocating to the Thames Estuary in darkest Essex and it’s here that he assembled his band, The Welfare Mothers, and now brings his music to the masses. And pretty good music it is too.”

‘Pay, Pack And Carry’ is the latest offering from Bob and his band, the follow up to 2015’s well-received ‘Little Rock,’ and it’s a solid piece of Americana that mixes some strong country influences with a nod to the power pop of the likes of Elvis Costello and Nick Lowe. Interestingly, one of the featured guests is Martin Belmont, who contributes some very nice lead guitar work. Belmont has worked with both Lowe and Costello, as well as a host of other names associated with country-influenced pop and rock.

There are ten songs on the album, eight from Bob Collum and two covers – a sort of campfire singalong reading of Mike Heron’s ‘Log Cabin Home in the Sky,’ with some good harmonies and a nice mandolin break, and a very fine take on Mike Nesmith’s excellent ‘Different Drum’ which allows fiddle player Mags Layton to show off her skills. Probably the best of the original tracks is ‘Hey Blue,’  which has a bit more attack than some of the other tracks and, for this reviewer, this is one of the problems with the album. Collum writes decent songs but there’s not much that stays with you once you stop listening to the record. Even after repeated plays it’s the cover tracks that tend to stand out and make the most impression.

This is a good album but it lacks a real killer track. There’s not a bad song on the record – they’re all very listenable and contain some great ideas but as a whole, ‘Pay, Pack And Carry’ lack something that’s identifiable as a signature sound for the band.

One to watch but they’re not quite there yet.

A decent album that lacks a solid identity