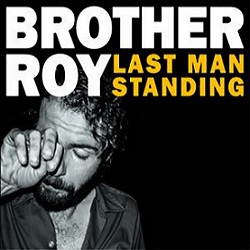 Remember when intense singer-songwriter J. Tillman, still working the day shift as drummer with Fleet Foxes, had a musical and emotional epiphany and transformed into Father John Misty? After serving time in Phoebe Hunt’s band The Gatherers, and touring with the likes of Sarah Jarosz, it seems that Brother Roy underwent a similar conversion after attending an Indian ashram and, in true Beatles form, dropped some LSD. And the mind expanding revelation that came to him was that what he really wanted to do was dig deep into his admiration for the likes of the aforementioned Fab Four, and their good buddy Harry Nilsson, amongst others name checked on his press releases. The big difference here is that, unlike most people who ‘fess up to their great influences Brother Roy has actually turned around and produced an album of songs that actually sound as if they were indeed influenced by these great influences. Which means, if you haven’t guessed already, that Last Man Standing is a rather groovy album – if you can dig where that’s at.

Heartbreaker leads the album off, and sounds as if it slid off a Nilsson album – with big bold bursts of horns and a smooth rock arrangement as Brother Roy growls a celebration of womankind in general through a particular personification “oh mankind saviour… got a way that you do the things you do / so keep on doing them girl / keep breaking heart of every man who’s ever walked this world”. The piano and strings ballad Sunshine Lady opens sounding as if it could have slipped right off Nilsson sings Newman, adding a smooth balm to Brother Roy’s light toned vocal.  Last Man Standing isn’t all about Harry Nilsson though – Brother Sam is a swing jazzy influenced track that oozes a cool funk strut, which could get one thinking of Dr John, as the tale of a slick dude is unfolded. Crazy Bill on the other hand is a far less slick would-be dude, who’s braggadocio unravels amusingly to a powerful strutting piano and organ accompaniment with more of those punching through horns and stabs of guitar. Somewhat like a funkier Jim Croce. Come on by the House is a candy-cane sweet love song which unabashedly grabs hold of the prime directive of the era it evokes “I believe in these times / yes I believe that all you need is love / it’s the only way to get right”.

Last Man Standing sounds like it was cut somewhere in the early seventies by a band full of musicians who are on the right side of the musical cusp before finding out that, as Mick Fleetwood has it, “cocaine is god’s way of telling you you have too much money”. It’s got a strong base in rock, it has plenty of grooving horns, it has songs that are tall tales and others which are openly romantic – but with lyrics that carry a little bit of bite a well. Brother Roy – you took the right direction, sure enough.

Hearkening back to a golden era of rock, and finding new nuggets of his own Brother Roy delivers a great sounding album.