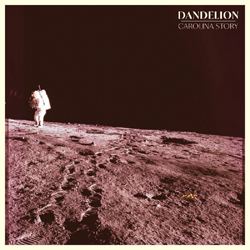 Carolina Story, a husband and wife team, Ben and Emily Roberts, have crafted a rather fine album on what is their second release. The pair are assisted by a fine crew of musicians who deliver a fine mix of classic countrified folk-rock with lashings of cosmic pedal steel on several of the songs giving some of the album a nice retro LA canyon glow.

Somewhat serendipitously, they have centred the album around its title song, explaining that the humble dandelion, commonly thought of as a weed, is a tenacious little bugger, growing in any tiny crack of dirt it can find, a true survivor. It’s not too far a leap to consider that this is somewhat akin to us in this time of pandemic and their reasoning informs the album artwork which features an astronaut on the moon encountering a bunch of the hardy little perennials.

The song itself works well with the duo’s very listenable harmonies over some tasty strumming and admirable harmonica playing but it’s shaded by several songs elsewhere on the album which are much more engaging. The opening songs, ‘Light of The Moon’ and ‘Lay Me Down Easy‘, are quite sublime, the keening pedal steel prominent and the vocals, especially on the latter, excellent. There’s some muscular heart beating on ‘Hold Of Me’ and even a dash of Byrds’ like jangle on ‘Long Black Train’ while ‘Time Well Spent’ finds Ben Roberts almost on his lonesome on a pared backtrack which is quite affecting in a Texan troubadour style.

At times they abandon restrain and teeter on the edge of Fleetwood Mac pop-rock as on the slightly clumsy ‘See You When I See You’ and the more successful ‘I Wish It Would Rain’. It’s a minor quibble really, as, when they hit the button on a song such as Daylight, a lovely dreamlike number, they sound quite classy.