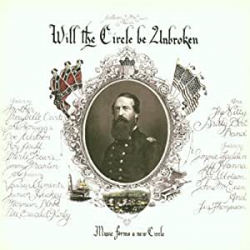 During the late 1960s and early 1970s, pop music was crawling with long-haired folk-rockers from California. Teeming with them in fact. But these god-damn Long Beach hippies, led by Jeff Hanna and McEuen, took themselves off to Nashville and coaxed some of the greatest names in ‘old time’ country and bluegrass music out of semi-retirement and semi-obscurity, to revisit their glory days. Mother Maybelle Carter, Roy Acuff, Earl Scruggs, Merle Travis and Doc Watson all showed up. Bill Monroe flat out refused to have anything to do with these freaks, which he may well have later regretted.

A triple album, with nearly forty songs, many of them stone-cold country classics of the 1930s and 1940s. And it’s a joyous listen. Particularly with all the background studio chatter left in, which gives these oh so familiar songs their historical perspective. Mother Maybelle’s pitchy vocals don’t detract from her legendary picking and strumming technique, laid beautifully bare on ‘Keep on the Sunny Side’. Old Merle Travis revisits ‘Dark as a Dungeon’, which he wrote but Johnny Cash took to a different level. Interspersed are a number of traditional rags and instrumental pieces where banjos, mandolins and dobros take flight, powered by the likes of (then youngsters) Randy Scruggs and Norman Blake. Roy Acuff sings ‘Wreck on the Highway’ and ‘I Saw the Light’, and the ensemble lifts the sound to the high heavens, where Hank Williams and Ira Louvin both nod their approval.

There’s tons more; we’re just looking at the first of the three discs here. Naturally, everybody who was there (or anywhere nearby) join in together when the band rounds the whole thing off with the Carter Family’s ‘Will the Circle be Unbroken’ (eighteen backing vocalists in total!) If you were there, you’d probably have wanted a slice of the action too.

The band recorded Volumes II and III of ‘Will the Circle’ in the late 1980s and early 2000s, respectively. The ‘world’ was far more accustomed to the concepts of roots and Americana by then; both records garnered CMA and Grammy awards. But the first record was their template.