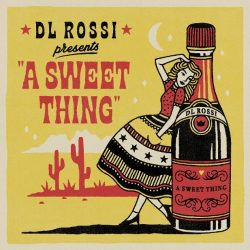 Many singer songwriters use their experience of ‘life’, in whatever form that may take, to inform their art. Inspiration can come from many sources but, for many in this business, how often it seems that it is the lowest points in their lives that are the catalyst for their songs. For D.L. Rossi that well of inspiration is deep, drawing as he does upon a background that includes overcoming cancer, a nervous breakdown and a painful divorce.

Rossi credits ‘A Sweet Thing’ as being a cathartic emission, a coping strategy for confronting his past. Focusing on the aftermath of the divorce the songs reverberate with feeling. ‘Better’ is a cautionary tale, a man looking in the mirror at himself “I’m broken up, that isn’t an excuse to be an asshole after a few………get your shit together, be better”. Revealing a glimpse into the self-awareness that he had been lacking for so long, Rossi delivers a thoughtful lyric with the degree of melancholy and sparse accompaniment that the song deserves.

Rossi cites the likes of Jackson Browne, Tom Petty and Ryan Adams as musical influences but on the standout opening track ‘This Road’, particularly on the rising chorus, it is the distinctive twang of Teddy Thompson that springs to mind. This is a top slice of Americana, great voice and backing vocals, wailing guitar and killer chorus. The song was written in the aftermath of a shooting in a shopping mall, words inspired by the loneliness Rossi felt in those anxious minutes as he escaped the chaos and uncertainty of what was going on around him. It is a track that instantly demands your attention, pricking your ears in anticipation for what is to follow.

That the aforementioned ‘Better’ is the next track only reinforces the thought that this seven track album is going to be a memorable one. The remaining tracks have the constant of Rossi’s great vocals with those intelligent, thought provoking lyrics and some first-class production but, after those first two songs, what follows tends to be a tad more unremarkable. With a mix of paces, simpler arrangements interspersed with more up-tempo, rockier numbers, these are decent, solid songs but just lacking that  early standout appeal of the opening tracks.

Anyone new to D.L. Rossi should rest assured that his is a voice worth seeking out in that broad church that is roots Americana. The price you pay sometimes for setting the bar impossibly high at the start is that what follows is rarely able to match up. This shouldn’t detract from what remains a very decent album from a talented singer songwriter.

A decent piece of roots Americana with some real highlights