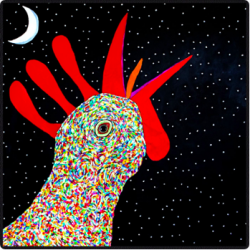 The opening to ‘Wooh Dang‘, Swedish musician Daniel Norgren’s eighth record, drifts dreamily into focus. With a mixture of birds and ambient nature sounds, as well as strange sci-fi noises, it sounds like a BBC sound effect archive mash-up. Then, somewhere in the background, Norgren’s high pitched vocal and guitar playing seep in. Before you know it you’re snapped into the next track, ‘The Flow‘, and pulled along into this sun-soaked dream river of an album.

The organic transition between the first two tracks is a microcosm of the whole album. Recorded in a dusty old room in a farmhouse in the woods entirely on analogue equipment (as is Norgren’s preference), it has an irresistible mixture of dreamlike ambience and tactile immediacy. It’s simple americana in some ways, but it’s coherency, dynamism and surreal infusions make it stand out starkly from the run-of-the-mill fare you might be used to.

This strange juxtaposition of energies is fantastically effective, as borne out by the rest of the wonderfully diverse album. There are some straight up foot stomping bluesy rock’n’roll numbers, such as ‘Dandelion Time‘, and a couple of brilliantly soul-infused ones, particularly ‘Rolling Rolling Rolling‘. Norgren’s voice soars above the instrumentation and never fails to evoke strong feelings, especially in the more tender moments, of which there are many. The whole thing is tied together by accomplished musicianship, and strange personal touches, like the recurring electric guitar sound, which really cement the record as a single living and breathing entity.

There are so many interesting moments and catchy songs, and so much great playing on this record that it’s hard to sum it up succinctly. Norgren himself, describing the recording process, said it’s been his “life for the last few years,” and you can almost hear how much he’s poured into it. He’s a great songwriter, and here is a collection of great songs, energetically performed, organically intertwined, and bookended by field recordings made in the woods around the farmhouse where the record was made.

Seeps into your soul like a sunny day. Listen to it.