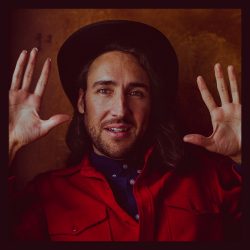 Daniel Steinbock’s first full-length release, ‘Out of Blue’, is a relaxing, calming and often beautiful reflection on love in its various forms. Throughout, there is a sense of hope and positivity, even finding the good in heartbreak and hard times. Steinbock sings: “When the heart feels broke open wide / It’s the beginning of the mend,” and this neatly summarises the mood of the whole record, which is a refreshingly upbeat take on life. After two self-released EPs, the Californian-native has developed a distinctive sound that is very easy to listen to.

‘Out of Blue’ opens with the single, ‘Pine Needles’, which is representative of the whole album in its tone and gentle sound. Steinbock’s voice is smooth and clear over quiet, finger-picking guitar; it’s an almost a lullaby-like ode to his ‘muse’. One of the record’s strengths is Steinbock’s consistently soothing, soulful vocal. Next, Steinbock eases into one of the album’s highlights, ‘Good News’; with the slow-paced bass line, organ, piano and electric guitar, there is a fuller sound. The sumptuous backing vocals from the Rainbow girls and the rolling sax solo add texture to this unselfconsciously romantic song. Follow-up, ‘13 September’, is a nostalgic story of the beginnings of a deep, loving relationship, which feels very personal.

Although all the songs are similarly laid-back, they are arranged to emphasise the subtle contrasts. Quiet acoustic numbers and songs with more instrumental layers take turns, ensuring that the listener notices these differences, such as flourishes of piano or electric guitar. Two of the songs are written in three parts, including ‘Too Close To You’, another high point on the album. John Craigie introduces the song with a plaintive harmonica and further depth and variation is added by the acoustic guitar, deep double bass and a classical guitar solo, which seems to flow from: “…a river of shooting stars.” Each part in the song has a delicate change in pace, tone and texture, particularly noticeable when Steinbock delivers the whispery vocal of the second part accompanied by the piano. The narrator, as a child, is afraid of dying and his mother responds with these lines: “For every star that you can see / There’s a child afraid of dying / What you are, what you are was meant to be / Filling the black up with shining.” At over seven minutes, it’s the longest song on the album and one of the most rewarding. The themes of escape and searching for somewhere to settle are clear, with some arresting images and lyrical details, such as: “I’m never going back to there / This morning I combed my hair / For no-one else but me.”

‘The Shadow, The Wolves’ is, perhaps, the most memorable song, made distinctive by the fabulous sustained notes of the mellotron at the beginning and the dreamy vocal harmonies provided by Ayla Nereo. Throughout, ‘Out of Blue’ benefits from excellent collaborations and instrumental performances, including the double-bass, Hammond organ and saxophone. All these layers of instrumentation are clear and bright thanks to the quality of the production and mixing.

The album’s mood and themes are summed up best in ‘Poet’s Price’, in which Steinbock lists the challenges faced through life, but each of these: “…is a white bird rising over me / Now gone.” It’s a relentlessly positive, optimistic message about the power of love and connection. All-encompassing love is sung about as an almost-spiritual experience, implied by multiple religious and Biblical references scattered throughout the songs, from the idea of spreading the ‘Good News’ to a “…church without walls…” Thematically, the most important is: “Every night I’m born again into something new,” which, once again, reinforces the idea of turning life’s challenges into something better. We all need a bit of this sometimes.