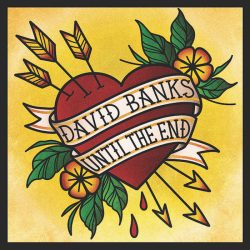 This is the first solo album from former Whybirds guitarist and co-writer David Banks. It’s an ambitious sound –big, big ballads; to some extent picking up where the Whybirds left off in 2017. They returned to Bedfordshire to ponder their next moves, the joy of Clangers and the legacy of Luton box vans. Banks has found the time to give us own manifesto Opener ‘Someone To Lean On’ has crashing guitar chords and pounding drums, with Banks’s gentle voice pleading to be, err, leaned on.
It’s a strong start and a bold statement of intent. ‘Right By Your Side’ slows the pace but doesn’t lessen the impact. Banks doesn’t offer up any deft lyrical moves, which might be a shortcoming to some. The crux of the matter is whether the big sound and simple lyrics are a step that has Banks ending up in some 1980s, Bryan Adams, stadium rock wasteland. The opinion from these ears is that he doesn’t – it’s big, honest Americana – in the mould of Petty and Springsteen. It pushes to distil the bare essences of those forebears. ‘The Best of Me’ keeps the sound in the ‘right’ place, with harmonica, dobro and organ again it’s a tidy Petty/Springsteen-esque track. Wasted is also pretty Petty and quite good for it too. ‘I Think I’m Gonna Be OK’ maybe tiptoes over the stadium rock precipice to shake hands with Bryan.  Banks gets back on track though with ‘Broken On The Floor’ bearing a hint of Neil Young in its slow, tumbling rhythm and pondering, open fade out.

Simple and honest, wearing its classic Americana rock influences proudly on its sleeve