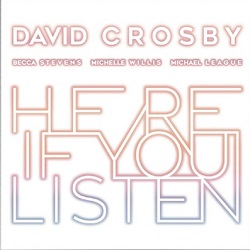 David Crosby has been on a quest over the last few years to make up for the time he’d squandered on a path of self-destruction. This is his fourth solo album since 2014 saw the release of ‘Croz‘, and part of the process of being prolific has involved having two bands – albeit with some overlapping membership – who can work on different styles or feels in Crosby’s music. On ‘Here if you listen‘ we’re back with the Lighthouse band – Crosby’s gentler, jazzier sidekicks who offer the unusual aural experience of Crosby and predominantly female harmonizing and dueting vocals. The combination of the voices of Becca Stevans and Michelle Willis also offer David Crosby another opportunity he never really had before – that of recording an album with his favourite singer-songwriter, the “better than Dylan” Joni Mitchell.

There’s more than one occasion when the ear is tricked into thinking that Crosby has dug up a previously unused Joni vocal and incorporated it into a new track – but it’s not so. This feeling is rather underscored by the choice of the album’s closer – ‘Woodstock‘ – Joni Mitchell’s fantasy of what the defining musical festival was like. It’s a bit of a statement of intent, redefining the song away from Crosby’s previous recording of it with his rockier cohorts in CSN towards the gentler, less strident – less powerful if you will – music of his new band. “Who needs S & N anyway ?“, the C of CSN seems to be saying.

The other thing that is aiding David Crosby’s late flourish is collaboration – generally the songs are written with the band members, with Crosby taking the lyrics credit alone a few times. And a couple of the songs are written without Crosby’s input – he’s a generous band leader, taking the best of his younger collaborator’s efforts. It clearly serves him well, as the liner notes explain that he went into the studio with just two songs written, and a month later he and the band had wrapped the album. Like the earlier ‘Lighthouse‘, there’s a laid back feeling to the album but it is not without its harder edges. ‘1967‘ is like a throwback to Crosby’s original perfect “hippy” solo album, all hazy acoustic guitar, wordless singing and a final floating vocal asking “What are you fighting for / The crack of your baton / Compression in your firearm“. ‘Other Half Rule‘ has the melody of a gentle ballad but Crosby proves again that you need to listen to the words as he expounds on the fragility of a world where “rocket men and little hands” have their “fat fingers on the trigger“.

Elsewhere the album can be somewhat unfocused. The soulful and bluesy ‘Janet‘ is a love triangle which seems to be mostly a vehicle for Crosby, Stevans and Willis to show off their take on three part harmonies, whilst the immigration issues raised on ‘Vagrants of Venice‘ would have benefited immeasurably by not having the intrusive finger snapping effect that mars most of the song. Even so it’s in the final measure an album that any Crosby admirer will want to hear, the man himself is in fine voice and he’s obviously enjoying being buoyed up by his creative new band, a pleasure that’s seeping into his live performances as the new songs take their place alongside the classics.

Perhaps a little too laid back in sound, Crosby continues his spate of recent releases reflecting his new found work ethic.