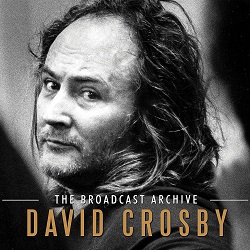 This live broadcast box represents how good these “archive” (aka bootleg) sets can be. This particular collection is made up of three CDs, two of which have been generally available for a few years. Towering Inferno is a Crosby, plus backing band, appearance from 1989, New Years Eve with the Dead is dated to 1986 whilst David and the Dorks is Croz with the Dead again, this time from 1970. Taking these from most recent to the earliest – Towering Inferno has a mix of songs from Oh Yes I Can, alongside classic CSN tracks. The sound is spot on, no complaints at all. The first couple of songs are performed by Crosby alone, Tracks In The Dust captures the feeling of letting go of political convictions as the Hippie generation gets older. This is followed up by a nice, but not superb, reading of Guinevere. Oh Yes I Can can’t compete with the first CSN and CSNY albums so it’s the full band cuts from these that really impress – Deja Vu, Wooden Ships, Almost Cut My Hair and Long Time Gone are, rightfully, the songs that are going to draw most listeners in.

New Years Eve with the Dead is actually Crosby acting as a support act to The Grateful Dead. It’s just Crosby and a guitar, making for a very different feel on some of the usually epic scale songs like Wooden Ships. Lee Shore is very nice, Triad is a little jokey and Drive My Car is as minor a song as ever. The sound quality of the recording is fine – the sound in the hall is not quite as good as on Towering Inferno but David Crosby is in great voice. Bulking out the fairly short set that Crosby had been allocated is a radio interview from around the same time – with some interesting thoughts on Stills, Young, Jim Morrison and others. The final CD is from a much earlier period – there’s some tape hiss here which can be quite intrusive in places but on the whole it’s not too bad. The actual recording is quite…relaxed, with songs extending out beyond nine minutes. Cowboy Movie is suitably loose, punctuated with some shining electric guitar. Triad is taken slow and serious, the Dead standard Bertha appears as does the traditional Motherless Children making for a varied set.

As a collection these three concerts are very listenable and varied.  They make the case for the easier availability of these items of “historical interest”.  Anyone who has followed Crosby’s career over the years will most likely want to hear these.

Crosby in his prime and Crosby returning to his prime – a bunch of live recordings that are worth hearing.