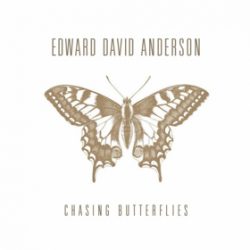 Edward David Anderson (EDA) is a gifted songwriter and multi-instrumentalist, who spent a decade fronting the revered Midwest rock band Backyard Tire Fire, before he broke away and released his ambitious debut ‘Lies & Wishes’ in 2014. That album was lauded “a superb solo effort” by No Depression and David Dye (NPR World Cafe) praised its follow-up ‘Lower Alabama: The Loxley Sessions’ as a wonderfully soulful record.

His new album, ‘Chasing Butterflies,’ was recorded at the Nutt House in Muscle Shoals with a fantastic backing band including Lucero’s Todd Beene on pedal steel (for the title track) and Jon Davis (Dylan LeBlanc) on drums and Jimmy Nutt on bass and percussion. The core of the 10-track album was cut live in just a few short days with minimal overdubbing and you can sense the creative excitement throughout this record which has an alluring mood throughout.

The quality of songwriting here is exemplary. Without exception we are treated to consistently strong melodies with memorable hooky choruses that will live with you after only a few listens. There is a very strong and diverse lyrical theme to these songs while the musicianship on the record is outstanding throughout.

Right from the off on the opening track ‘Harmony’ EDA grabs your attention with: “She’s been singing songs with her Mama since the age of 3/She’d learn to sing the high parts sitting on her Mama’s knee.” Some clever and engaging guitar work here with a very catchy chorus. ‘The Ballad of Lemuel Penn’ tells the story of the Lieutenant Colonel who was murdered by members of the Ku Klux Klan in Athens in 1964 and how they were acquitted by an all white jury: “Lemuel Penn is a good man…. he died because of the colour of his skin”. A very endearing song – really enjoyable.

You will be humming the chorus of ‘Bad Tattoos’ after just one listen. “The story of my life’s written on my skin”. Very catchy effort from this gifted songwriter and multi-instrumentalist. ‘Crosses’ tells stories of individual graves, “a cross at the side of the road,” and includes a tremendous Nashville-style guitar solo in the same vein of Jason Isbell’s ‘Anxiety’ and equally as proficient. ‘Dog Days’ has Anderson celebrating the innocent life of his treasured dog: “That’s my dog, he’s sleeping like a dog…. he doesn’t care who’s President”– great fun and quite uplifting.

The Title Track, ‘Chasing Butterflies,’ is a brutally honest and dark memoire from an artist who has certainly lived: “Well I hitched a lot of rides, had my share of brides…. shooting guns, starting fights, running drugs into the night”. Some tasty pedal steel from Todd Beene here.

Great record this one from start to finish. A highly recommended listen.