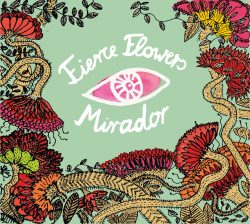 A mirador classically offers an extensive outlook, which is undoubtedly consistent with the breadth of music produced by this trio from Paris. They have encompassed everything from European folk to Appalachian bluegrass. Many different musical references mix to create a panoramic soundscape. Despite this, the resultant sound does not jar as you progress through the album, the different compositions sit comfortably together to produce a harmonic whole. They have effectively combined professional musicianship across a broad range of cultural styles with outstanding close vocal harmony singing throughout in both French and English which is their undoubted strength.

‘Song To The Open Road’ is a delightful banjo picking bluegrass interpretation of the poem by Walt Whitman, whereas the title track ‘Mirador’ is an altogether less comfortable combination of tense vocals and intense violin which contrasts with the easy opening tune to establish this is not going to be linear progression along a predictable path. This changes to ‘Tell Me No’, a vocal driven blues dirge with a persistent drum rhythm. ‘Deux Pierres Noires’ is fine French a capella. ‘Tell Me Lies’ combines many of their more disparate elements effectively into a traditional sounding Americana folk song. ‘Scene De Danse’ is based on a classic one-step composition. ‘How To Fly’ is more banjo driven Americana and the album closes with the poignant a capella ‘Underwear In A Letter’.

This is their first full album and it is a joy to listen to, even when the content is not always joyful. It is not the finely honed nineteenth album by a music legend long in the tooth, and it shows. It has all the breathless enthusiasm of musicians having fun. It has made it straight onto the family playlist, which given the amount of new music that we hear, confirms there can be no finer accolade than the initial response of “who is this?”

Put simply, “The picture is alive, every part of it shines in its best light”. This may well remain one of my favourite albums this year and I have already booked a ticket to see them when they tour.

A delightful melange of French folk and bluegrass