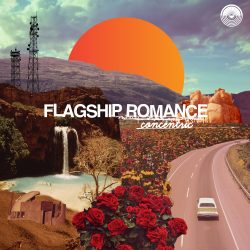 For an album penned almost exclusively on the road, touring from house party to small-town theatre, ‘Concentric‘ sounds on first spin a little too glossy, a little too Nashville paper hat for the homespun rags to rags story that follows this New Mexico duo around. On the next listen you realise that was a false dawn, that ‘Flagship Romance’ and their long-time associate and producer Lee Miles Buchanan have lulled you into a comfort zone, only for the initial illusion to be subsequently shattered by the razor-sharp harmonies, fusion styles and culturally dynamite content that initial sugar-coated impressions may have left.

Shawn Fisher and Jordyn Jackson are a married couple who never let their musical differences get in the way of a good song. Described as rock n roll howler and jazz torch songstress, it seems that whatever forces were at work on the romance side of the relationship also spilled over into their music partnership. Some equations might not sit well on paper, but the human element takes no heed of such things and ‘Concentric’ is the result of ‘when two worlds collide’ – and in this case that result means a collection of heartfelt songs, dedicated to both the average Joe and indeed the world  at large as they address topics that relate to us all, while finding a style that veers around different genres, touching many and settling on none. A little bit midwest americana, a little California pop, a little folk. There’s something of Christina Martin in the execution of the songs, the refusal to be held to account and the ability to hit a home run with a simple melody. These twelve songs could easily have sounded trite from a lot of artists, but there is a deep understanding of the subject matter behind every utterance from Fisher and Jackson, which Buchanan has utilised as a focal point with an insightful presence from the  producers’ chair.

Whether telling the story of the transgender soldier denied the right to go to war, “Julie wants to go to war/To fight for the right of being born unsure”, or couragiosly reinventing Woody Guthrie in ‘This Land Was Your Land’ with country lap steel guitar by Chris Claridy, imagining life in the fast lane and the danger of how it might make you lose sight of the things you really value in ‘California Mansion’, or just the window down, blue sky, feel good americana of ‘His Town’, great songs are certainly present, but the delivery of two human beings perfectly in tune with the spirit of the other is the real secret behind Flagstaff Romance. That is the sugar-coating that can initially be so misleading.

Sparks fly as Romance shakes up the natural order