Friends for over three decades, it took Dave Alvin, the founder of seminal punk roots band The Blasters, and Jimmie Dale Gilmore, of the pioneering country-folk trio The Flatlanders, until last year to collaborate at long last. Embarking on a spontaneous twelve-city tour, the two veterans of the road found a mutual love of New Orleans Rhythm & Blues, Texas and West Coast Country Music, traditional folk and early Rock n Roll. Their duo sets could drift from Merle Hagard to Sam Cooke to the Youngbloods, and the pair apparently had so much fun they began planning a record as soon as the tour wrapped.

The result is ‘Downey To Lubbock’, a twelve-song collection that takes on a diverse range of American music spanning nearly one hundred years. Along with ten covers, Dave Alvin wrote two originals for the record: the autobiographical title track and the fantastical ‘Billy The Kid and Geronimo’ – about an imagined meeting between the two 19th century outlaws whose lives became the stuff of legend in the American West. Gilmore, who is part Native American, voices the thoughts Alvin wrote for Geronimo, the Chiricahua Apache chief who was one of the last Native American leaders to abandon his resistance against white colonization of the American Southwest. 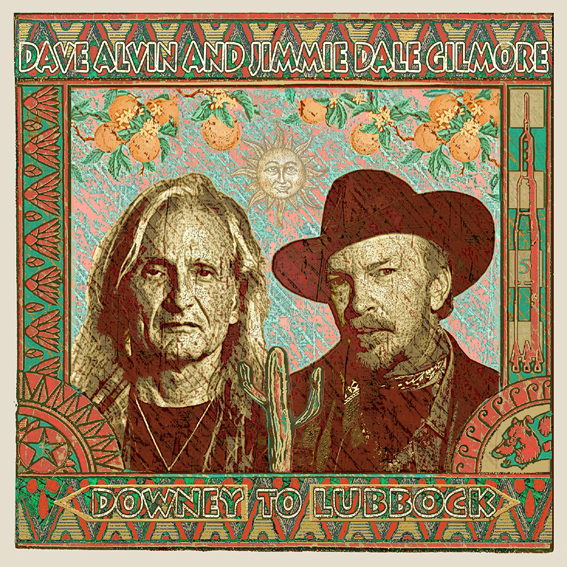 Elsewhere on ‘Downey to Lubbock’, Alvin and Gilmore explore the musical pipeline between their home states, taking on the work of Texan-Californians Lightnin’ Hopkins, Brownie McGhee and Johnny “Guitar” Watson. Hopkins was a personal favourite of both men during his regular sets at Los Angeles’ Ash Grove in the 1960s. There’s also a version of ‘Deportee – Plane Wreck at Los Gatos’ (the 1940s Woody Guthrie classic) while contemporary covers focus on friends of Gilmore and Alvin now no longer with us: Steve Young, John Stewart and Chris Gaffney.  Look out for a review on AUK nearer its release via Yep Roc on June 1st, and in the meantime here’s a sampler to whet your appetite.