It’s Forgotten Artists time again and this time around I’m taking a look at a band and duo that burned brightly and briefly but left a lasting impression with some outstanding music.

In 1976 a new American “supergroup” emerged. Bestowed that damning adjective by the American music press, American Flyer brought together a group of musicians drawing on a very wide range of influences and experiences. The band consisted of Craig Fuller, guitarist and singer from Pure Prairie League, Steve Katz, guitarist extraordinaire, who had been with The Blues Project and had co-founded jazz-rock giants Blood Sweat and Tears, Eric Kaz, keyboard player with Blues Magoos, and Doug Yule, who had replaced John Cale on bass for the Velvet Underground. No one really knew quite what to expect from this band but it was the country-rock favoured by Fuller and Kaz that dominated and, with their self-titled album released in their first year and produced by Beatles maestro, George Martin, great things were expected from the band.

Similar in production style to the albums Martin produced for the band America during this same period, the first album was well-received, achieving a minor chart hit with the Fuller/Kaz composition ‘Let Me Down Easy’, which just crept into the lower reaches of the Billboard Top 100, and boasting, among other tracks, Eric Kaz’s superb ‘Love Has No Pride’ (co-written with Libby Titus), which had already been a hit for Bonnie Rait and would be covered by a host of high profile singers, including Linda Ronstadt and Rita Coolidge. The album is full of little gems, Steve Katz ‘Back in ‘57’ is particularly good, and the whole set deserved to do much better; like the single, the album only crept into the lower regions of the Top 100, despite the support of the critics and the pedigree of the band members.

Undeterred, the band returned the following year with their follow up album, ‘Spirit of a Woman’. Perhaps not quite as strong in its selection of songs as their debut, the album still boasts the glorious title song, another Fuller/Katz composition, as well as the same duo’s beautiful ballad ‘Dear Carmen’ and Eric Kaz’ ‘I’m Blowin’ Away’, another of his compositions that had first been recorded by Bonnie Rait. This time production was handled by the band themselves and Ken Friesen, a Canadian Producer/Engineer who would become known for his work with Anne Murray. He was possibly not the best choice to work on this album and some of the song arrangements don’t do them full justice, but the album boasted guest appearances from Bobby Keys, Linda Ronstadt and J.D. Souther and was, again, well received by the critics. Sadly, it wasn’t so well received by the record-buying public. This was the late ‘70s and the winds of change were already blowing through the music business. The Eagles seemed to have close-harmony country-rock sewn up as a genre and perhaps there wasn’t room for another band in a similar mold, no matter how good their songs were. 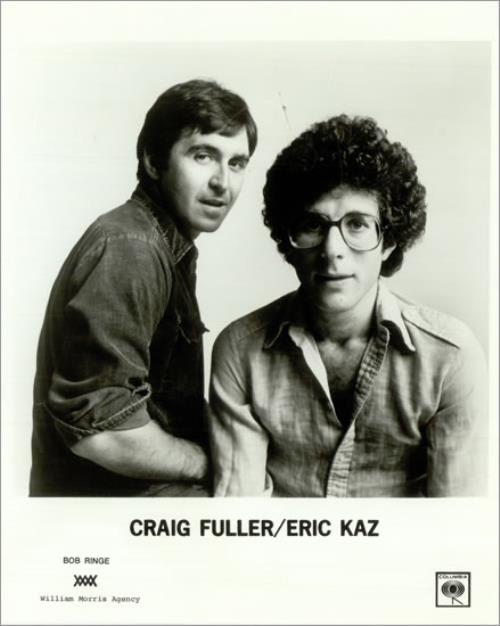 The band split up after the second album but there was to be one more roll of the dice by Fuller and Kaz, with their 1978 album, released under their own names, following closely in the footsteps of the work they’d done with American Flyer. Released on the Columbia label, this album remains one of the great “lost” treasures of Americana. The duo recruited producer/engineer Val Garay, who had worked with Eric Carmen and Linda Ronstadt, and he had a good ear for the sound the pair were aiming to produce. His touch is much lighter than that used on the second American Flyer album and it suits their songs better. Once again, they managed to pull in an impressive list of musicians to work with, including Russ Kunkel on drums and Steve Lukather on guitar. Backing vocalists include J.D. Souther again, as well as Michael McDonald and Leo Sayer! Once again, it’s a fine collection of songs, with the Fuller/Katz composition ‘Annabella’ being the stand-out track but closely rivalled by Fuller’s ‘Feel That Way Again’ and Kaz’ achingly beautiful ‘Cry Like a Rainstorm’. There really isn’t a bad track on the album and it remains a firm favourite for everyone I know who has been lucky enough to discover it. Once again, the general record-buying public pretty much ignored it. It seems that Fuller and Kaz, and their other bandmates, were in the wrong place at the wrong time – like so many of our “forgotten” artists, the late 70s was not a good time for well-constructed, reflective songs with simple arrangements and strong vocal harmonies. Had they been around today, there can be little doubt that American Flyer, and Fuller and Kaz, would’ve found their music reaching a much wider audience.

The failure of the Fuller & Kaz album brought the final curtain down on the American Flyer years but the members of the band all went on to have distinguished careers associated with music. Following the demise of American Flyer, Steve Katz became the East Coast Director of A&R and later Vice President of Mercury Records. During this time he developed a deep interest in Irish music and would go on to become managing director of Green Linnet Records, a record label specialising in traditional Irish music in America. He would then leave the business to become a professional photographer – but he never stopped performing and can still be seen at small venues around his native New York.

Following the commercial failure of the Fuller/Kaz project Craig Fuller would eventually join Little Feat. His voice bears some resemblance to that of the late Lowell George and he would front the band from 1987 to 1993, recording three albums with them. He re-formed Pure Prairie League in 1998 and the band is still performing to this day, though Fuller finally quit in 2012.

Though Eric Kaz would never achieve commercial success as a performer he was already a successful songwriter when he joined American Flyer and he has gone on to be one of the great songwriters working in the Americana genre. Artists who have recorded his compositions include the already mentioned Bonnie Rait and Linda Ronstadt along with Alison Krauss, Beth Nielsen Chapman, Kenny Rogers, George Strait, Kim Carnes, Randy Meisner and many, many more.

While we know that many of the artists we feature here are not really forgotten by the majority, I do think that American Flyer and Fuller/Kaz are unknown to a lot of our readers and that’s a great shame. They really were among the best of the ‘70s country-rock bands and are more than worthy of your attention as, hopefully, these selections show. Enjoy.