Welcome to another feature in the FORGOTTEN ARTISTS series, where we take a look at some of the Americana musicians that may just have dropped out of people’s memories or who, perhaps, never received the appreciation their contribution to the genre deserved. This time Martin Johnson shines a light on one of the great pioneering musicians of Americana; the wonderful Rose Maddox.

To modern ears, Rose Maddox is a truly forgotten artist. However, anyone who has enjoyed west coast country, country rock or bluegrass from The Byrds, Flying Burrito Brothers, The Dillards, Gram Parsons, Emmylou Harris and The Desert Rose Band will have unwittingly felt her influence.

Additionally, she is also an icon for female country and americana artists as she competed head to head with the male stars of the day, rather than  taking a more passive supporting role. Her influence didn’t stop there: with her brothers as The Maddox Brothers with Rose, she laid some of the ground rules for country boogie, rockabilly and country gospel. Finally, she and her brothers were one of the first country acts to wear stage costumes designed by Nathan Turk, thereby influencing the look of country music right up to Gram Parson’s marijuana plant Nudie Suit designed by  that other rodeo tailor, Nudie Cohen.  Some writers have speculated that if she had not been so aligned to the west coast country scene then she may have been more celebrated today by a Nashville dominated industry. However, it is doubtful Nashville would have given her the freedom to produce the music she did, the way she did.

Rose Maddox was born on August 15, 1925, in Boaz Alabama to a family of sharecroppers in the foothills of the Appalachians. However, her grandfather was a fiddler and travelling preacher, while she had an uncle who performed in blackface so there was clearly musical knowledge and ability within the family.  This family musical tradition would later help her develop her musical style. The life of a sharecropper in ‘30s Alabama was far from easy, and Rose’s family decided in 1933 to follow their dreams to California, like so many similar families from the South.

The journey to California could have been the subject of a film as the family walked, hitched and rode the freight trains all the way to their promised land, after selling their possessions to raise $35 to fund the trip. For a time Rose Maddox was left with another family, as her own felt they couldn’t cope; unfortunately, not an uncommon practice at the time. Luckily, she was reunited with her family as they became fruit pickers in Modesto, California.

The drive and determination to improve their lot that inspired the family to move to California, pushed her brothers to form a band when they realised that bands playing the local rodeo circuit could be paid up to $100 an appearance. A local furniture store owner agreed to sponsor some radio spots for the group if they were fronted by a girl singer. The Maddox Brothers and Rose were formed.

The group soon achieved local success playing to an audience of dispossessed southerners, like themselves. They won a State Fair competition that named them  California’s best hillbilly band,  While her brothers provided excellent backing, it was clear that the young Rose Maddox was the star of the show with her exuberant performances. The group’s progress was interrupted by WWII when the brothers were drafted. After the war, the group restarted their career, and following Roy Rogers’ recommendation, wore stage clothes designed by Nudie Cohn. They were marketed as the Most Colourful Hillbilly Band in America and played songs such as Woody Guthrie’s ‘Philadelphia Lawyer’, Hank William’s ‘Honky Tonkin’’ and the gospel tune ‘Gathering Flowers For The Master’s Bouquet’. They were the first country band to play Las Vegas in 1949, the same year they made their debut on the Grand Ole Opry. Their stage costumes initially provoked ridicule, but it wasn’t long before their style became the prevailing style of country artists in the ’50s.

California, while making their home in Hollywood. They did occasionally play  throughout the country, including the Louisiana Hayride. Like many similar acts, The Maddox Brothers felt the full force of the rock’n’roll explosion, disbanding in 1957.  Rose Maddox had been given her own contract by Columbia records in 1953, and she continued to develop her solo career. Her singing style was called country boogie, though Rose Maddox simply called it country, while admitting adding a touch of rock’n’roll. Her relationship with the Opry proved to be troubled, when, on her first solo appearance, she appeared in a blue satin dress that featured her bare midriff.   She left the Opry six months later, when Roy Acuff complained she was being featured on too many local TV shows.

Despite her issues with the Opry, Rose Maddox continued to be popular and signed to Capitol Records in 1959. She had her first solo chart success with Capitol Records when ‘Gambler’s Love’ went to Number 22 in 1959. Other hits followed, and she was invited to join Johnny Cash’s roadshow and record with Buck Owens.  Her artistic and commercial peak was achieved in 1962,  when Bill Monroe encouraged her to record a bluegrass album, making her the first woman to record bluegrass. 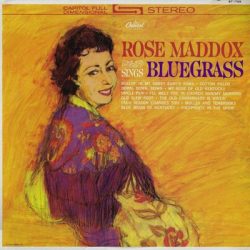 & Smiley were also on the session. Bill Monroe is quoted in Rose Maddox’s biography as saying “The Maddox Brothers and Rose always had their own style, but you must remember their home was Alabama, and I always thought they sang a lot of the old Southern style of singin’. So, I enjoyed helpin’ her out on one of her albums. She had some great entertainers workin’ on it, and it didn’t take long at all.” Maddox herself said “Bill Monroe has always told me that I sang bluegrass, and to me what he was talkin’ about is just what I call ‘hillbilly’.”

Life on the road proved a challenge for Maddox as she succumbed to Benzedrene abuse. Heavy touring also put a strain on her voice, and while she beat Patsy Cline and Kitty Wells to be named Cashbox’s female country artist of 1963, her chart career was over.

She continued to work and record around California in the ‘70s and ‘80s. A particularly productive partnership was formed with west coast bluegrass pioneer Vern Williams. Williams was instrumental in bringing Appalachian music to Northern California, and some of the young musicians he worked with include Jerry Garcia, Herb Pedersen, Sandy Rothman and Peter Wernick.  In 1982 Maddox  recorded some of her old songs and bluegrass favourites with Williams, on the ‘This Is Rose Maddox’ album.  While she is singing bluegrass, you can still hear the links to what Maddox called hillbilly music in her vocals. A bluegrass gospel album, ‘A Beautiful Bouquet’, with Williams followed in 1983. While the album is traditional, Maddox’s vocals are still unique with echoes of the honky-tonk still clear.

While Rose Maddox may have been overlooked by the powers that be in her long career, she did manage to secure a Grammy nomination in 1994 for ‘$35 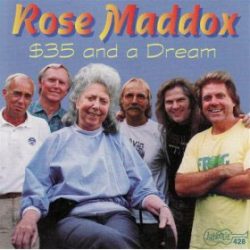 and a Dream’ in the Best Bluegrass Album category. The album featured members of The Desert Rose Band, including Herb Pedersen but not Chris Hillman, Merle Haggard and Byron Berline reflecting her status as The Queen of West Coast Country.  The album included a mixture of bluegrass and country classics, with Maddox’s still enthusiastic vocals. Johnny Cash finishes the album with a statement about her: “I worked with Rose Maddox a lot back over the years. And I found that when she started working my show that she was probably the most fascinating, exciting performer that I’d ever seen in my life. She was a total performer. She captivated the audience. She held them in the palm of her hand and made ‘em do whatever she wanted to. The songs that she sang were classics, and I loved the way she sang and kind of danced at the same time. I thought there was and still think that there’ll never be a woman who could out-perform Rose Maddox. She’s an American classic.”

Emmylou Harris has said that Maddox didn’t receive the recognition she deserved partly because of a reluctance in American society to celebrate the value of white country and roots music. Coming right up to date, Laura Cantrell’s song ‘California Rose’ is about Maddox.  There we have it, Rose Maddox, who was a unique performer and who was a major influence on west coast country and a role model for future female country and Americana artists, is an artist who deserves to be remembered.