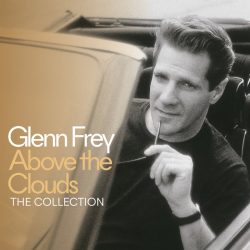 Glenn Frey will forever be associated with the Eagles, the band he formed with Don Henley and which came to define Country Rock in the 1970s. Sadly, Glenn was one of the flurry of musicians that left us recently, dying just over two years ago, and Geffen/USM have now decided to celebrate his solo career with a four-disc retrospective,  ‘Above The Clouds’.

Credit has to go to the record company for taking a different approach to the commemorative box set. What we get here are three CDs that look at different aspects of his solo career, along with a DVD of his 1992 performance at the National Stadium in Dublin. The DVD wasn’t part of the review package so I can’t comment on it but the ‘Lyin’ Eyes/Take it Easy’ medley that closes out side one of Disc 1 is very good indeed and taken from that same performance, with Frey’s band sounding tight and on the money, as you’d expect from such a perfectionist. On that basis the DVD should be a good one.

But what of the music on the other three discs? With Disc 1, subtitled ‘The Very Best of Glenn Frey’ you get exactly what it says on the tin: a greatest hits package. There’s plenty here to remind us what a great talent he was, both as a writer and musician. The disc kicks off with ‘The Heat Is On,’  the iconic theme song from Beverley Hills Cop, and quickly moves through a number of outstanding songs, including the big Miami Vice power ballad, ‘You Belong to the City,’ as well as his other major Miami Vice song, ‘Smuggler’s Blues’ (for this reviewer the best of his solo tracks), which actually formed the basis of an episode plot (and also for the plot of the Miami Vice film) and gave Frey his debut as an actor in that episode; there’s also ‘Sexy Girl’, ‘The Allnighter,’ Soul Searchin’’ – all the tracks you would want on a Glenn Frey solo hits package. This disc is also available as exactly that, a standalone single Greatest Hits disc – and for the casual fan this may well be enough. If, on the other hand, you’re a dedicated Glenn Frey fan and something of a completist, then the other two discs offer some interesting additions.

The second CD is the oddity in the set. The tracks on this disc look at Frey’s less commercially successful work, what the press release refers to as his “prowess beyond the charts”. The problem is that there’s a reason the songs on this disc weren’t as commercially successful as the songs on Disc 1. It’s not that they aren’t good songs or that they aren’t delivered well, it’s that they’re Frey’s indulgences and many of them are a long way from the music his fan base will associate him with.

The hard facts are that both Frey and Henley were, initially, quite successful as solo artists – but the further they moved away from the sound of the Eagles the more their fans fell away. And some of the songs on this disc move a very long way away from the Eagles sound. Several of the tracks here are taken from his 2012 album ‘After Hours,’  celebrating pop standards from the 1940s to the 1960s – so we get cover versions of the Beach Boys ‘Caroline, No,’ the Ink Spots’ ‘For Sentimental Reasons’ and, quite bizarrely, the Johnny Mandel standard ‘The Shadow of Your Smile,’  a song that became particularly popular with crooners like Sinatra and Andy Williams. We’re not in Kansas anymore, Toto! There’s a good rocking version of ‘Route 66’ which showcases Frey’s often forgotten ability as a pianist and another interesting rocker in the shape of his own ‘Better In the USA’ with its anti Soviet rhetoric, but many of the tracks on this disc are soaked in sentimentality and, while they might offer some insight into aspects of Frey’s personality, they’re not going to have wide appeal to fans.

Of much more interest is the third CD in the set. Subtitled ‘Longbranch/Pennywhistle’  this is the original self-titled album from the band Frey formed with fellow Detroit singer/songwriter J.D. Souther prior to the Eagles. Souther would go on to be co-writer on some of the Eagles’ biggest songs including ‘Best of My Love’ and ‘New Kid in Town’ and you can hear some of that influence in the songs on this early collaboration between the two musicians. The album has been remixed and remastered and its inclusion here should be of major interest to Frey fans and Americana historians alike. This is where you can hear the start of Frey developing the sound that he would take to another level with the Eagles and, while none of the songs are particularly earth shattering, there are plenty to catch the attention, particularly Souther’s entertaining opening cut, ‘Jubilee Anne’ and Frey’s two solo compositions, ‘Run, Boy, Run’ and ‘Rebecca’.

‘Above the Clouds’ is a bit of a “curate’s egg” in that it’s good in parts – but it’s worth having for those good parts as they’re often very good indeed. The ‘Longbranch/Pennywhistle’ album is the real icing on the cake and it was a shrewd decision by the record company to include that in this collection, as it elevates it from a simple greatest hits package to something that offers much more of a career retrospective on a talented musician and songwriter, who will probably be best remembered for his work with one band but should also be celebrated for his wider contributions to music in general, and country rock in particular.