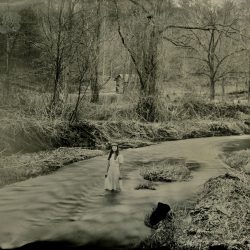 Americana often produces some great voice combinations, especially with male/female duos – think of Gram Parsons & Emmylou Harris, Kris Kristofferson & Rita Coolidge, Johnny & June Cash, The Civil Wars and many more; it’s a long list. Now it’s time to add one more duo to that long list of great voice combinations, if not of particularly good names! Gold Light and Snakemusk, or Joe Chang & Beau Romeo (surely “Joe & Beau”, or vice versa, has a better ring to it?) as they’re known to family and friends have been singing together since 2017, though both were working solo prior to teaming up, brought together by a shared love of classic country-tinged songs of love and loss. ‘Shadows in the Shallows’ is the first recording from this new collaboration and it’s an assured debut that should see them continue to explore making music together. Of the two singers, Romeo has the more interesting voice, being quite ethereal but also having a world-weariness about it that works well on these songs. Joe Chang’s voice is a good light tenor, which is very listenable but nothing outstanding on its own.

Their strength really does lie in the combination of the two voices, best illustrated by back and forth vocals on the naively charming ‘Being Sweet’, which blend together particularly well and the production on this recording has done a great job of making the voices the focal point while keeping them balanced against the sparse instrumentation.

The other major strong point of this album is the quality of the songwriting. All but one of the songs come from the pen of Joe Chang and he writes a good song in the aforementioned classic country-tinged style, as evidenced in opening track ‘The Heart is a Lonely Hunter’, which also shows off his ability to write for the voice of his partner. On this opening cut Beau Romeo provides her own harmonies and it’s a strong track that lays out their stall and underlines the strength of their offering as a duo. Chang also writes a decent Springsteen-esque rocker as shown by second track ‘The Last Picture Show’ with its references to teen romance in small town America – “Took my baby to the county fair, ate some funnel cake won her a teddy bear, got stuck up atop’a on the ferris wheel we were both so scared made our hearts stand still”. Chang has a good way with a storytelling lyric and also writes strong melodies that lodge well in the memory.

Interestingly, the only non Chang written track on the album is ‘Heart of Black’, which comes from Romeo and is in stark contrast to Chang’s writing. ‘Heart of Black’ is a much darker affair that has more in common with classic Murder Ballads than Country love songs – “I’ve been robbin’ all of my life, I’ve never had a job or a wife ‘cus I’ve got a heart of black and daggers shoot from my eyes”. This is a strong counterpoint to Chang’s writing and even his closing track ‘Death’, seems light by comparison to Romeo’s one contribution. It would be nice to think that, going forward, more of Beau Romeo’s songwriting might find its way onto their albums, especially if the example here is anything to go by. This is a good duo with strong songs and a great sound but the songs can be too sweet – a little more darkness wouldn’t go amiss.

In addition to the duo, who do all vocals and between them play most of the featured instruments, mention should go to the other musicians on this recording: Nic Jenkins on Drums & Percussion and Adam Cullum on Piano. This music often has a fragility that needs to be handled with a light touch and these musicians seem to perfectly judge what is needed from them.

“Shadows in the Shallows” is a good album with a great sound and Gold Light & Snakemusk are one to watch for the future – but some harder-edged songs would be a welcome addition to the next recording.