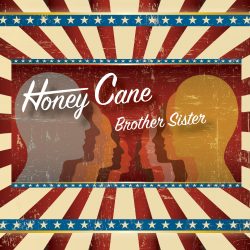 Artists and their work often develop a tight bond with a specific geographical location. Whole genres are identified by their association with a region but perhaps less common is an entire album evoking a place. Honey Cane’s second album ‘Brother Sister’ does just that in creating a record that sonically embraces their home state of California. Whether big cities, arid desert or wild coastline, this aural travelogue stops everywhere. Sundrenched aptly describes the Americana, indie-folk and pop that lie within Honey Cane’s state lines.

Frontman Jerry Slavonia embodies California, musically inventive, he also pursued a successful career in his state’s trademark industry – technology. Whether Slavonia has found a transferrable skill in his improvisation it certainly works musically. At times he does get rather intense, but overall what he does comes from the heart. A theme very close to that core is the environment. In a voice that sounds not unlike Robin Pecknold of the Fleet Foxes, Slavonia also confronts politics and presidents.

The first line of opener ‘California’, “Said I love you in the morning, California” feels like a pale rising sun as the song intensifies into the hot Californian day. Though a love song, the emotional fades into the physical landscape.

As with the contrast from freeways to barren coast, ‘Blue Moon’ leaves the city pop for full blast rock in an environment of the same. Driving guitars with keys pound wave upon wave. “Oh I wonder why this can happen/if we share the same sky” Slavonia pleads. It is a powerful anthem to his state.

Moving from the physical to emotional in pace and lyric, title track ‘Brother Sister’ could have come out of California in the 1970s. In a voice twisted with emotion Slavonia urges his brothers and sisters not not to give up – things can get better.

A three-song run, ‘Conception’, ‘The Moment When’ and ‘Before I Move On’ each has a languorous feel. This is the heat of the day and movement slows accordingly. On first listen they feel may similar, but as with the whole album each has its own character so listen carefully to appreciate the nuances.

‘Walk on the Moon’ closes this Californian dream on a hopeful note. This is still the land of opportunity and in a lighter touch, at a thoughtful pace, Slavonia’s message is positive.

Author and environmentalist Edward Abbey wrote, “There is science, logic, reason; there is thought verified by experience. And then there is California”. With ‘Brother Sister’, Honey Cane could not have put that better.