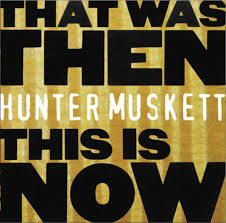 In 1969 The Beatles released Abbey Road, 150,000 attended the second Isle of Wight Festival, Lulu shared first place in the Eurovision with Boom Bang-a-Bang and, somehow absent from the Wikipedia entry for that year, Chris George, Terry Hiscock and Doug Morter formed Hunter Muskett. A year later, following a signing to Decca and the release of their first album, bass player Rog Trevitt joined to become the fourth musketeer. A second album followed in 1973 before the band called it a day the following year.

40 years later the 2013 release That Was Then This Is Now was the successful culmination of an initially tentative foray back into the breach. The album has a lovely, unhurried warmth to it. Mellow, laid back vocals drift around the common thread of some wonderful guitar work.  It is understated and subtle but it is affecting and very easy to listen to.

Those guitars work their way way into every track, sometimes playing second fiddle to the harmonies but, more often than not, thrust to the front of the stage and placed firmly in the spotlight. It is such a dominant feature of the album that perhaps it is no surprise to find tracks titled Diamond Guitar and Steel Guitar with some definite nods to Rea and Knopfler along the way.

Once Bitten offers a change of pace, blistering harmonica and honky-tonk piano that mirrors the Mary Chapin Carpenter classic, I Feel Lucky. Written by Morter, it may or may not be a humorous take on his relationship with the fairer sex ‘What is it with women who just like to shout? When the shouting’s not working they beat you about, well you can shove all your antics up your all-seeing eye, once bitten, twice shy.’ However intended, the song demonstrates that as well as being extremely talented players these mature gentlemen know how to write a lyric.

It is perhaps unsurprising to hear that Bert Jansch is cited as one of the band’s main influences in those early years.  There are elements of country, folk and gentle blues on display here but it is those guitars that give the album its heart and soul.

The guitar is the star for the reformed Musketeers