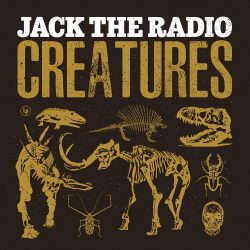 As a band Jack the Radio do what it says on the tin–their new 14 track release ‘Creatures‘ is radio-ready, ideal accompaniment to a road trip with the radio blasting out. With roots firmly in southern rock, but with added edge from some tasty steel guitar the band bring a fresh sound and well-crafted songs with memorable choruses.

Hailing from Raleigh, North Carolina the album is their fifth, with earlier releases dating back to 2011. The all-original songs on the album were written by singer George Hage with a broad concept of reminding us that we share a common humanity and are all creatures of this earth–an appropriate message for these troubled times.

This side of the band is reflected best in up-tempo rocker ‘Elevator‘, with its driving rhythm, handclaps and shouted chorus – it’s pedal to the metal time.

More typical of the mid-tempo songs making up the majority of the album is the first single off the album, ‘We’re Alright‘, with echoes of Lynyrd Skynyrd, and another of the memorable riffs which drive much of their material, and also leaning towards Boz Scaggs in his recent blues era. Elsewhere there are strong echoes of the Steve Miller Band’s ‘The Joker‘ in one of the standout tracks, ‘Hurricane‘, a band influence also evident on ‘We’re Alright‘.

Several tracks feature guest vocals from Tamisha Walden, who brings a soulful edge to title track ‘Creatures‘, which also boasts some psychedelic guitar, while a slower tempo is struck in ‘Trouble‘, a ballad with backing vocals from Jeanne Jolly.

Slick production is up with the best, striking a perfect balance of putting those potent guitar riffs at the front of the mix, while maintaining due prominence for the vocals. Creatures was recorded at Warrior Sound in Chapel Hill, NC with engineer Al Jacob.

A fine blend of guitar-driven southern rock and Americana, the perfect soundtrack to that road trip!

Convincing radio ready riffs for your Southern US road trip