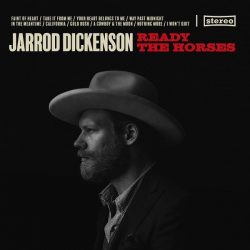 Looking forward, out of interest rather than any prior knowledge, to seeing Jarrod Dickenson locally, there was a particular disappointment when all events were suspended. If and when he comes back I am sure to be in the front row. His most recent album, ‘Ready the Horses’, is a cracker. The only thought is that he may struggle to reproduce its richness on stage. For once the press release did offer some genuine and accurate insight, informing us that: ‘Dickenson is known for his soulful vocals and ability to blend a variety of instruments and influences into one signature sound.’

Exactly so.  It’s claimed that the spirit of Muscle Shoals and Stax hangs over the album and again that seems to be right on the money. Often laughter has to be suppressed at the claims made for some artists and their often bizarre and extensive range of inspirations – Jazz is always one that raises a smile – but on this occasion, the artist has produced a mix of something we might reasonably call country soul and it is really beguiling.

Although Dickenson has been a prolific tourer – visiting 15 countries and apparently playing hundreds of gigs, his recorded output is limited to three albums the third being this offering. He grew up in Waco, Texas, spent time in Los Angeles and Brooklyn, before returning to Nashville. He also found time to visit Ireland where he met his wife Claire who now performs with him and provides vocals on this album. Busy as he will have been Dickenson also seems to have had time to grow a moustache for which Biggles would probably have given his favourite Sopwith Camel.

The abiding sound on the album, though there is plenty of variety, is that of well-arranged horns and some great Hammond organ – an instrument that seems to be a favourite for a good number of artists at present and which is absolutely no bad thing. Previously Dickenson has been compared vocally to a young Tom Waits and Leonard Cohen. Those comparisons do not so readily apply on this offering and a better comparison might be the second Boz Scaggs album, ‘Boz Scaggs’, which, coincidentally, was recorded at the Muscle Shoals studio with the house rhythm section. Forgetting, ‘Loan Me a Dime’, (no easy matter) the album achieves the same successful mix of country-tinged blue-eyed soul. Neither has a voice of great technical range but both are possessed of warmth and feeling that draws the listener right in. It’s not necessarily a case of ‘sounds like’ with the two artists but more a shared feeling and sensibility.

The album kicks off with, ‘Faint of Heart’ suggesting that life will always knock you down for no good reason and without thought. Second up is, ‘Take it from me’, possibly the stand-out on the album, with great horns and that Hammond organ – a tale of domestic disharmony. How splendid to have a saxophonist called Leroy Horns on the roster – and even better that he does a great job.  The themes of domesticity, lives spent together, chance meetings and might have been’s continues in, ‘Your Heart Belongs to Me’, a rather standard lyric if a nice sentiment rescued by a great performance including the first appearance as a lead vocalist by partner Claire.  ‘Way Past Midnight’, is a syncopated foot-tapper and with, ‘In the Meantime’, and, ‘California’, explores similar themes. The latter uses the pleasing image of the absence of the Californian breeze as emblematic of lost good times.

The tone is varied effectively by two sparse tracks using no more than three musicians, namely, ‘A Cowboy and the Moon,’ and the final track, ‘I Won’t Quit’, the former being a simple but effective story of an ageing cowboy that could easily be a Willie Nelson number.

‘Gold Rush’, has a harsher, grittier sound (courtesy of that renowned instrument, Hammer and Metal Serving Tray) and compares two types of speculators – those in the west on horseback and those back east in their suits. It’s a moot point as to which is the wildest and least regulated of the two locations.

These stories are well told, they bear comparison with the vast majority of peers and the words do come vividly to life when performed by Dickenson and his fellow musicians, but this album is ultimately held back from the highest possible rating by the songwriting. For some thoughts on top drawer lyrics then check out colleague Mark Underwood’s articles on this web site from July 2nd 2019 and April 20th 2020. You may not agree with all his choices but he does highlight what can lift the very good to the exceptional.

Nonetheless, ‘Ready the Horses’ is an excellent offering and highly recommended from an artist seemingly very experienced as a performer, although less so as a recorded artist. Here’s hoping that tour gets re-organised soon and that the next recording session is not far behind.

An exceptionally accomplished album with the spirit of Muscle Shoals