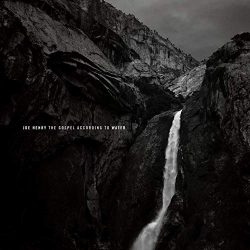 In his 30 year plus career, Joe Henry has achieved a great deal. He has just released his 15th studio album ‘The Gospel According to Water’. He has produced artists ranging from Bonnie Raitt to Solomon Burke. He has collaborated with a range of top-class Jazz musicians including Ornette Coleman, someone who qualifies for that overused epithet – legend.  He has co-written a book about Richard Pryor and he has partnered with his sister in law Madonna.  Hats off to a CV like that.

The current, beautifully packaged album reflects the artist’s recent serious illness which thankfully seems to be a situation that has stabilised – and let’s hope that continues to be the case. So, all that said, it is with some trepidation that I have to confess that I couldn’t take to this disc at all.

Lyrically I have seen it described elsewhere as ‘opaque’ and I think that hits the nail, politely, on the head.  Whilst the words fit together nicely enough I wasn’t able to make enough sense to get anything from them.

For instance – ‘As evening is fading / It sings like an old city burns / We listen in waiting / For all we have yet to unlearn’ – which is taken from the eighth track, ‘Book of Common Prayer’

I never got Ezra Pound either; plenty of people cleverer than me consider him a genius but for Pound, so for Joe Henry; the words passed right over my head leaving little trace. The trick would seem to be to match the beauty of the language with an allusiveness that is comprehensible but also capable of helping the listener see or hear in a new light. The obvious master of this was Leonard Cohen. It seemed that you always knew what he was referring to, however he chose to say it.

Even Henry’s fans would acknowledge his voice is an acquired taste – and I don’t think I’m going to acquire it anytime soon. Again, a comparison sprang to mind – I can see Joni Mitchell is a great artist but I just could not and cannot abide her voice – which always leaves me feeling that I am the one missing out. I find the same with Henry’s voice.

Finally, I found the accompaniments way too meagre and uninteresting, setting a tone that persists throughout the set.  The only musical highlights were the occasional interjections of saxophone and clarinet provided by son Levon. The clarinet was particularly refreshing.

I listened to a previous offering by Henry, ‘Civilians’, from 2007 and in truth still struggled with the vocals and lyrics, although the accompaniment was livelier and more interesting. I can do off the wall or unusual vocalists, Tom Waits or Sam Baker for instance, but sad to say I failed this test.

The ‘Gospel According to Water’ is sparser than ‘Civilians’ but if you liked the latter then I am sure you will find the former engaging. A little bit of research reveals plenty of very high praise for Henry’s work and if you like his oeuvre then I doubt this will disappoint.  Heartfelt as it surely is, it just wasn’t for me.