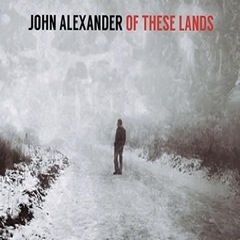 John Alexander is a Scottish singer-songwriter with a ton of influences and a load of natural talent. With people like John Martyn, Greg Brown, Bob Dylan and Muddy Waters on his list, as one would expect pretty and fluffy doesn’t come into the equation. His lived-in vocals and rootsy style of playing see images of the road, and everyday life ease across the skyline in authentic fashion. Alexander’s music isn’t short of takers. One track from his last album “Nowhere To Go” was used on the US TV show, The Lizzie Borden Chronicles, and with his sound steeped in good old-fashioned earthy organic roots Americana,  Alexander possesses a sound more akin to the banks of the Mississippi than his native River Clyde.

Among Alexander’s finest efforts here you have the gritty blues masterpiece All My Angels Have Fallen, and with a vintage folky feel Don’t Fail Me has a nod or two towards Bruce Springsteen running through its veins as he digs deep into story-telling pleading not to be let down.  Alexander sticks pretty much to this template with the sound not altering too much, just enough to keep the listener interested. With Take The Blame the listener enjoys the use of drums and bass to go with some particularly fine acoustic guitar from the man himself. Sounding a little like Kelly Joe Phelps at his best, Seven Cold Curses creates a vivid sound and imagery, and that isn’t the end of the noteworthy tracks. Hallowed Ground, fuelled by slide guitar likewise produces a rich authentic sound. It is a little haunting as images akin to the swamp regions of Mississippi – Louisiana come to mind.

Opener track Meet Where The River Flows sets the record away in solid fashion, though busier than some. Neither this track nor the songs that follow are over-produced. My mind edges towards Springsteen as Alexander’s vocals take on a greater barbed edge to them on Who Why When, such is his performance it matters not one iota especially with This Side Or The Other which follows as his music loosens up and he gets to ramble and a lighter, vibrant feel replaces the rootsy grit that dominates his sound.

Alexander writes all 11 tracks, and is responsible for near all the acoustic and electric guitar work, plus he has Iona MacDonald (backing vocals), Paul Tasker (lead acoustic guitar, A Little Daylight; slide guitar Hallowed Ground and electric, This Side Or The Other) and Jim McDermott (drums) and Nicolas Blythe (bass) likewise drop by for three songs, and finally, Kevin McGuire on double bass.

a ton of influences and a load of natural talent