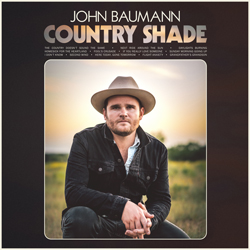 On his third album, ‘Country Shade’, Texas-based singer-songwriter John Baumann spends a lot of time pondering change – whether that’s the changing state of rural America, or changes in relationships and circumstances, but, after hearing the first few songs, you can’t help but wish he’d change things up a bit, rather than plough the same furrow of over-earnest, plodding, slick yet soulless, mid-paced and middle-of-the-road country rock.

It’s ironic then that the nostalgic and reflective opener, which laments how commercialisation has carved up US farmland and killed off the traditional country music he grew up with, is called ‘The Country Doesn’t Sound The Same.’

First single ‘Next Ride Around The Sun’ gets off to a promising start with a Beatlesesque mellotron intro, but soon turns into a cloying and clichéd ballad about living for the moment, in which Baumann advises us to: “Call up your old man, see if he’s up for havin’ a beer. Do it while you can, you don’t know when he’ll no longer be here.” He comes across like an annoying bloke down the pub, doling out such platitudes as: “There’s nothin’ that you can take with you when your time is gone.” Sorry, mate, but life’s too short to listen to that kind of thing. Just when you think it can’t get any worse, there are songs called ‘Here Today Gone Tomorrow’ and ‘If You Really Love Someone.’ On the latter, like some kind of Texan version of Sting, he actually tells us: “If you really love someone, you gotta set ‘em free.”

Listening to much of ‘Country Shade’ will give you that same awful feeling you get in the pit of your stomach when you go round someone’s house and see they’ve got a ‘Live, Laugh, Love’ sign hung on their wall. When Baumann cranks things up and has some fun, like on the tongue-in-cheek, rock ‘n’ roll boogie of ‘Flight Anxiety’, which tackles his fear of dying in an air crash and name-checks Buddy Holly and Stevie Ray Vaughan, it’s a very welcome relief. Death also gets a look in on ‘I Don’t Know’ – Baumann tries to make sense of the passing of a young friend, but clumsily surmises: “I don’t know why some remain, while others go.”

The title of the jaunty ‘Sunday Morning Going Up’ is a play on Kris Kristofferson’s ‘Sunday Morning Coming Down’, and the playful and summery ‘Homesick For The Heartland’, which has plenty of bluesy guitar licks, is one of several songs in which Baumann longs for a simpler place and time: “I recall the good old days, growing up in the country shade… I remember my heart was heavy, fixing up that dustbowl Chevy.”

All his reminiscing, pontificating and trite lyrics make listening to the album a long hard slog. Even in his press biog, when Baumann talks about recording ‘Country Shade’, he says: “Time is fleeting, and how important it is to do what you can, while you can.” He just can’t let it go, can he?