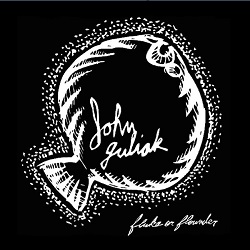 Dust, the first track on this outstanding album, is up there with the best of them. It has, all over it, the care and confidence of an expertly produced record. Here is homage to the dust and rain and the riven days on the Canadian prairies. John’s gentle voice centres movingly on the remembered details of small life there “where a girl’s eyes were the stars. /No need to look far for the sky”. Such understated storytelling, and simply expressed detail abounds in John Guliak’s songs. This is his third full-length recording. There have been gaps, including a few years working in Glasgow. Now, he is back in Edmonton, Alberta, at the top of his game.

On Dust, as throughout the album, John is supported by producer, Paul Rigby, who here plays a haunting pedal steel. Another of the standout tracks is the story of Emily, a First Nation, aboriginal Canadian. John presents us with the briefest of details of Emily’s life which epitomise the promises made to these indigenous people, quietly, yet piercingly conveyed in the words: “And where’s your family? /   Among the dead and wasted/   The hated and raped and tossed aside?” John’s understated writing pulls back from providing too much detail. It is upsetting enough to know that in the story there lurks: “a World War”, “the only man you loved”, and “your children’s haunted doorways”, which is more than enough to draw you in.

So, listen carefully to this collection. There is much to be involved in, and think about. To dip in, in no particular order, start with Threads. Listen to the introduction, its arrangement; listen to the question, “How could you not see?” Just a love song, yes, but somehow much more than that, with its reference to “sanctified ground”, (there’s a phrase!) and “dangling by that thread”, while the “knocks and creaks” describe the passing of the night. By the fade at the end, your thinking has been affected. John’s lyrics are deceptively simple, but contain that extra personal meaning.

Uptempo Triptych leads you in the same way. By using rhyming couplets, you are bounced into relating to “turned the wrong way” and “you know that’s a long way”. This is clever writing and thoughtful singing. The same applies to Rainy Day Couple a fine duet with Tyler Greentree, in a short song all about getting through it, despite digging that hole! And again, that simple line that reminds you and says it all: “I let you in the way again”.

Without any doubt, John has established himself in the modern folk tradition on both sides of the Atlantic. All songs here are written by him, except for two: Richard Thompson’s Poor Ditching Boy with its reference to the cold sad winters and the stormy wind; and Kate McGarrigle’s song of a journey, Talk to Me Of Mendocino,  with its reference to the western plains. Their inclusion speaks of John’s strong membership of this tradition.

This review has only scratched the surface of “Fluke or Flounder” with its great picture of a flounder on the front!  You must bear with it, and buy it.  And hope that John Guliak finds time to come back to the UK and perform here again. Wouldn’t miss that for the world, or a flounder for that matter.

A comeback album by an Alberta troubadour that puts a marker down for his place in folk affinity.