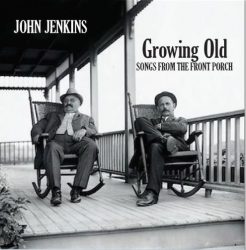 “I’m growing old” is the first, uncompromising, line of the first song on Liverpool-based John Jenkins’ latest album, and “I’m singing this song before I die” is  – in theory – the last line of the last track, so it’s maybe not surprising that the bulk of what comes between also dwells, heavily, on life in our twilight years. The most powerful of all of these age-themed numbers is undoubtedly the title track, which maintains its utter honesty about growing old throughout, all backed up by a series of gently growling, shimmering guitars. Lines like “I don’t like it, but sometimes I feel the need to thank it, because I’m still here as you can see,” capture perfectly the spirit of that old saying that if you don’t like having another birthday roll round, then just consider the alternative.

Rather than stadium rockers,  as the sub-title ‘Songs From My Front Porch’ suggests, nearly all of the 12 listed songs are gently paced, well-structured meditations with a clear personal, homespun, touch.   But just because the album mostly dwells quietly on having one foot in the grave, or a couple of toes at least,  it’s not all doom and gloom. On  ‘I’m Coming Home’, a couple celebrate staying together over the years with some freshly-made coffee and “holding you close, like I used to do when we first met way back in school.”

Yet while the series of rootsy ballads move along smoothly enough and with an appealing enough degree of diverse styles –  dipping into more Celtic-sounding territory on ‘Heartlands’ or veering into classic country and life as a solitary drifter with a murky past on ‘Bear Lake Country’ –  the lyrics just don’t have the same degree of consistent interest as the music, and the album is, at times, badly let down by that.

To be fair, some of the imagery is stunningly vivid, like when Jenkins is describing the plight of an old, lonely war veteran, “his single bed no larger than a tomb,” on ‘Daniel White’. But on other tracks it is so plain and/or clichéd the words barely register, one prime example arguably being  ‘The Last Song’. Inspired by a type of North American bird that keeps returning to the same patch of woodland in a fruitless search of a mate as the years go by, lines like “I’m singing this song before I fly and I say goodbye”, or “I’m singing this song before I die”, are begging out for some colourful, original imagery in between if they don’t want to end up sounding like music-hall melodrama. But unfortunately that’s pretty much as good, and as forgettable,  as it gets.

In fact the straightforwardness of Jenkins’ lyrics, which can be stunningly direct, at other times proves to be a two-edged sword.  On ‘I’m almost over you’   observations   like  “Time has the power to make things fade away” don’t exactly linger in the memory, either, particularly  when followed up by a line as cringe-worthily cheesy as “for every saddest hour I’ll try to make the brightest day.”

Telling it ‘how it is’ doesn’t automatically equate with being interesting, in other words, but fortunately Jenkins ends the album with a refreshingly unpredictable number, right down to its being the bonus, ‘secret’ track at the end of the lp. Boosted by some very lively backing from Amy Chambers on violin, ‘I  Just Don’t Care Any More’–  to give it a title based on the chorus – is a drily humorous take on the precariousness of life, financial and otherwise, as a modern-day musician.

“Spotify just played my song, another million hits [and] I can get a taxi home,” Jenkins all but snarls before adding “Maybe I could do something better: buy some brushes, clean some lavatories…”

‘I Just Don’t Care Any More’ has got an utterly different, irreverent tenor to the rest of the previous tracks and one which you wish he’d adopted more on an album which, if sometimes over-reliant on mawkish truisms in the lyrics, musically is definitely worth a listen.

Heart-felt, well constructed, if sometimes maudlin, meditation on life (almost) over the hill