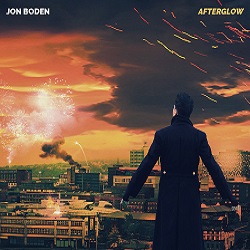 Jon Boden is of course a significant figure in the English folk scene – Spiers & Boden set a new benchmark for duo’s to meet, Bellowhead became a major label crossover band, and his legendary Folk Song a Day project was a landmark contribution towards a singing revival. Constantly pushing at boundaries his solo output indulges wider interests, as here on Afterglow the second of a putative trio of post-apocalypse albums that was initiated with 2009’s Songs from the Floodplain. The setting is a very English post-oil apocalypse, society has broken down and new tribal loyalties are being forged. Think the reportage of John Christopher’s Death of Grass crossed with the striking imagery of mental collapse in Ballard’s mirror-image disasters The Drowned World and The Drought. Where Songs from the Floodplain serves to set the scene for the new world, the religious revival and the appearance of local warlords with their carefully husbanded reserves of fuel, Afterglow is fundamentally a tragic love story. Jon Boden has said the setting of an annual fire festival in a ruined city is an extrapolation of the Lewes Bonfire Festival – in particular the tar barrel aspects – but there’s also something of the later Mad Max films, as hordes of ragged people come together for one night of hedonism. Fires burn in oil cans, embers fill the air beneath a sky full of stars as Jon Boden sings of doomed – or if you prefer star-crossed – lovers, destined, it seems, to have but one night together before they are torn apart again.

Afterglow is very much a folk-rock album, with the emphasis perhaps nudging towards the rock end. With the connectivity of the songs – and the topic – it’s also clearly a concept album so maybe a safer description is folk-prog-rock. Not that that is anything to be concerned about – if The Decemeberists can get away with the appellation then so can others, as long as the music is strong enough. And it is : even the rockiest of the songs lit by Richard Warren’s lead guitar are also mellowed by Paul Sartin’s oboe and the string section. All the Stars are coming out Tonight hits the highest level of excitement capturing the energy of “all the tribes” as they surge into the streets, whilst Dancing in the Ruin hints at the true sadness of the scene. Sure “the glorious rabble are running wild” and “jumping through the flame and laughing through the pain / dancing in the ruin” – it’s a great party, just a pity that it took the end of the world to arrange it.

Throughout Jon Boden’s voice weaves a ragged path through the city’s debris – varying like the flames dancing all around, surging up and then fading away into shadows. On the long penultimate track – Yellow Lights – the tragedy of the never-to-be-together lovers unfolds through a slow ballad which balances the harshness of their physical surrounding with the tenderness that two people can still find in each other. It’s the most acoustic of the songs, with a multi-layered, but light feeling, classical touch. Stitching together the lights from dying earthly fires with the eternal light of the night sky it has an elegantly sombre mood. Afterglow is a bold idea, and one that has worked well. Theatrical? Yes, of course, but it’s also satisfyingly well balanced and varied enough to hold the listener as the story unfolds. It’ll be interesting to see how the trilogy concludes.