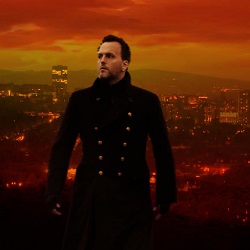 Giant of the folk scene Jon Boden is making a late attempt at the “hardest working man in folk” crown.  Not content with releasing a new album – Afterglow – this month and preparing to take this out on a full band tour in November, Jon Boden has also decided he has time for a cluster of solo shows as well.  And some festival appearance in October.

Afterglow is set in a dystopian future where star crossed lovers search for each other in a bewildering and hedonistic festival taking place in the ruins of a city.  Afterglow is in some ways a sequel to Jon Boden’s earlier release Songs from the Floodplain which concentrated on a more rural setting who’s inhabitants mostly avoided the ruined urban landscapes.  It’s another example of Boden’s theatricality, and his pushing at the boundaries of what we define as folk.  Sounds good too.