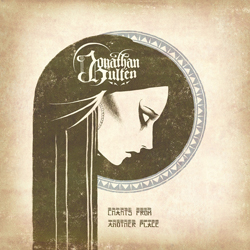 If you’re looking for an album to lose yourself in and transport you somewhere else during these anxious days of lockdown, then Swedish singer-songwriter Jonathan Hultén’s aptly named solo debut ‘Chants From Another Place’ should do the trick. Inspired by Acappella folk and church choir compositions, it’s atmospheric and mesmerising – in fact, it sounds like it was recorded deep in a Scandinavian forest, or hewn out of a mountain.

The reality is somewhat different. In a recent interview with Americana UK, Hultén – who is a member of Swedish death metal band Tribulation – revealed he’d made the record on his own in his bedroom, with an acoustic guitar, microphone and a computer, then added in other instruments to build up the sound.

Nick Drake is a huge influence on lilting-voiced Hultén – particularly his final album, 1972’s stark ‘Pink Moon.’ This clearly comes across in ‘The Mountain’ – a fragile and haunting, fingerpicked folk ballad.

With one guitar and three harmonies, it finds him: “Standing on the mountain, within the blood-red sun – I am fire burning in the sky.” It’s one of the more stripped-down moments and an obvious highlight.

‘Next Big Day’ is an upbeat, soulful strum – “waiting for the next big day – waiting to be blown away” –  and on ‘The Call To Adventure’, which has church organ and a pounding percussion track, he throws in choral vocals and eerie electronic effects.

On the latter, lyrically, Hultén’s death metal past rears its head, as he tells us: “Darkness – you hold the key I need to get where I intend to go,” then adds: “Death comes and grabs you by the shoulders and speaks in harsh tones.”

The enchanting, cantata-like ‘Holy Woods’ could be a long-lost, traditional Norse folk tune, albeit with a Simon & Garfunkel makeover, and the countryish ‘Where Devils Weep’ is essentially Fleet Foxes doing a Spaghetti Western soundtrack – complete with a Morriconesque whistling break.

The short, cinematic and piano-led ‘Wasteland’ and the moody, psychedelic instrumental ‘Outskirts’ – featuring percussionist Nacho Montero – would be well-suited for a Scandi noir drama.

Speaking about the album, Hultén says: “It will thematically take you through landscapes of ecstasy, passing mountains of death and rebirth, sailing seas of adventure, traversing wastelands of despair and forests of myth. It is an inward journey and only time can tell which places will be visited under its duration.”

That might sound like the back cover blurb for a second-rate fantasy novel, but listening to ‘Chants From Another Place’ is definitely a journey worth embarking on. Let’s face it, it could be the closest you’ll get to leaving the house over the next few weeks.