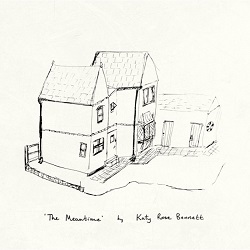 ‘The Meantine‘ is the fifth album from Birmingham based, rural Oxfordshire raised, Katy Rose Bennett. The nine songs that make it up are firmly in a modern folk vein, given an immediacy by Bennett’s decision to record ‘The Meantime’ live – just her singing and playing either guitar or piano with no additional backing or overdubs. It’s a move that gives the album a certain sonic consistency. There’s a lyrical consistency as well over the songs which split into adult emotions and struggles and a series of songs expressing parental love. Opening with ‘I have a Song‘ Katy Rose Bennett sings of troubles that lead her to sink into depths of despair only to find a fiery core “feel my way, feel the heat, of the magma underneath” which allows her to overcome – but not forget – what came before “I was lost and undermined / and now the melodies are haunting me“. It’s passionately sung with the emotion breaking clearly through. ‘Did You See‘ is a wistful piano ballad with Bennett’s vocal conveying the sadness of parting.

It’s a challenge to make parental love – or just how great one’s own children are – an interesting theme for any art, and song is no different in this respect. The slightly jazzy ‘Kiss You Goodnight‘ is ostensibly a song of separation, but it has the feel of a lullaby. ‘Shoulders and Boots‘ captures the strangeness of the anxieties of both adulthood and parenthood, and the reassurance that the simplest of activities can provide “I put you up on my shoulders and I hold onto your boots / and we march right up to the top of the hill / and wend our way down through the woods / I know exactly who I am, I can feel it in my back and my blood“. It’s sung with a real joy. ‘First Day‘, with its piano accompaniment, is by contrast rather plodding as Katy Rose Bennett wonders how her child is coping with their “first day at school“. It’s a song that has a universality – so many parents, if not quite all, could relate to the feelings expressed.   And somehow it’s that universality that, paradoxically, makes the impact less.  On ‘The Meantime‘ Katy Rose Bennett often seems to ask “does this seem familiar to you?” and the answer is often “yes, of course“.

Katy Rose Bennett has a strikingly clear voice, and her lyrical concerns are often focused on the minutia of life – ‘Round the Bend‘ looks at a curved ball thrown by a friendship – or is it a little more, or even a little less?  Whatever it is it is confusing and the muddle plays out into a drunken cacophony of indecision. ‘Hey Diddle-I-Doe‘ is sung over guitar and questions why the world doesn’t unfold as one plans, and ruminates on how obstacles have to be got around rather than complained of. It marks out quite clearly what could be seen as a fault across a number of songs on ‘The Meantime‘ – the reliance on “de-de-de-da” or “diddle-I-dum” or similar as lyrics.  Sure, it’s a style, but not a style that’ll appeal to all.  In the end ‘The Meantime‘ is an album one would want to like more, there’s a feeling that if it finds the right ears then lyrical ticks and topics could be endearing rather than off-putting.