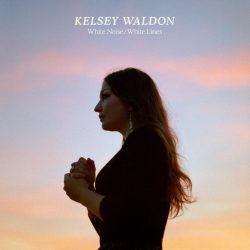 Kentucky Grit has the potential to be a big hit. That’s the best way to describe Kelsey Waldon’s new album. The rugged eleven-track record showcases her true and undeniable talent, as both a singer and a songwriter. The fact that she’s the first person in fifteen years to get signed to Oh Boy Records, John Prine’s label, shows that the Waldon is a force to be reckoned with. The album as whole feels quite intimate, but would still work great booming out over amps and speakers live.

‘White Noise/White Lines’ shows Waldon’s wide range of musical influences, taking inspiration from across all genres from, acoustic folk to a bit of rock n’ rock, but through and through it is definitely a bluegrass album.

Snapshots of Waldon’s life are shown throughout the album, but the one that adds the most to the album is a voicemail from her dad about hearing her on the radio, before going into the song ‘Kentucky 1998’ which catchy song about her upbringing before leaving for Nashville, Tennessee. Definitely the best song on the album. And the addition of the interlude adds to Waldon’s character, shows her love and appreciation for her family, which is also reflected in the song as she speaks about rough parts of her upbringing, but proclaims she would not have it any other way.

Waldon’s name is growing in the music scene and this album shows why. She is a talented songwriter and songs are catchy and overall the album is quite an easy listen