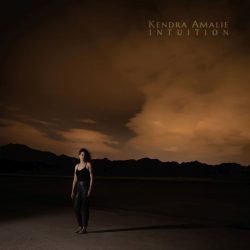 Musically, Kendra Almalie is someone who is hard to put in a box, but on her debut album she offers up an ethereal sonic richness that conjures up comparisons to the likes of PJ Harvey at her most unconventional. When discussing her music, Almalie has said that she comes up with the melody first and the words follow later, usually ending up being something akin to an interpretation of a dream. This composition choice feels evident in the sprawling rise and fall of the music along with the sparse lyrics (although some tracks are entirely instrumental).

The album opens strongly with its first single ‘Breathe Underwater’ before moving into ‘Boat Ride II’, a fully instrumental track full of psychedelia that glides seamlessly into the third track, ‘Facets of a Holy Diamond’, which is a kind of meditation on the human spirit with lyrics like: “We will all rise one holy spirit / Perfection without sin,” and, “We are facets of the holy diamond / We are love and light and peace”.

If you can see a pattern of movement forming from underwater to above, that was Almalie’s clever intention. The songs guide us from water to boat to city to global consciousness to farmland to the etheric plane and finally, back into the water.

‘Patternmaker’ is another instrumental, although it interestingly starts with sounds of bagpipes and footsteps crunching over leaves before going into the more typical swirling experimental sound of the rest of the album. ‘Stay Low’ encourages a weary traveller on their journey through a harsh world: “We’re not far now from my house / You can come keep safe your wait,” Alamlie sings breathlessly. “Could you say you come along / Did you have to run away? / Truth is that the world’s on fire / Better to be warm and stay low,” she adds.

‘Become The Light’ is the most conventionally Americana sounding track, but it still has heavy psychedelic vibes. “Look at the light / Become the light,” is repeated before we head into some heady rock guitar riffs, which eventually peter out and we move back into a meditative dreamy state. ‘Look At The Light (Source)’ closes the album coming in at almost 10-minutes in length, fading out with sounds of thunder and rain echoing along with the twang of a guitar.

This album is an experimental piece and certainly won’t be to everyone’s taste, but if you’ve got the time to spend listening to it from front-to-back without outside distractions, you might just find a little piece of enlightenment buried within.