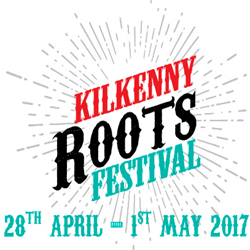 This was the second time your intrepid reporter has attended the annual celebration of all things good in Roots and Americana music that’s held in the beautiful city of Kilkenny in Ireland and now that it’s done and dusted, I can only scratch my head and wonder why only twice? Arriving on the Friday afternoon the first stop was Cleeres bar and on entering a pint of the local ale was thrust into my hand amidst many welcoming cries. It’s that kind of weekend. Folk I’d met once before at last year’s fest instantly said hello, some were veterans who have been attending since the nineties, some fellow newbies and soon we were all perusing the festival programme and working out our itineraries.

One of the delights of Kilkenny Roots is that, aside from the ticketed events, much of it is a moveable feast, a cornucopia of free shows (over 70 this year) courtesy of the Smithwick’s Free Trail. Most of these shows are in local bars and feature a mix of local bands and some imported from as far away as Austria. The talk of the town this year was the appearance on the Free Trail of The Peter Bruntnell Band (playing five shows) and Mother’s Little Helpers featuring James Walbourne (of The Pretenders, The Rails and Son Volt) who were scheduled to appear on four occasions. Notable local acts included The Barflies and Trouble Pilgrims who feature ex members of The Radiators From Space. With shows scheduled from 1pm to the late, late hours, working a plan around the shows you have tickets for is a complex affair especially with so many recommendations flying around from all and sundry. As one chum commented, it’s half the charm of Kilkenny that you get to a show, hear some songs and then move on to the next one. They’re so well attended that such comings and goings are not disruptive, as someone leaves another arrives. The acts have their audience and by all accounts, they have as much fun as the audience. Of course, some will just nail you to the floor at which point your plans go out the window.

It’s a packed weekend but with the exception of Chip Taylor, The Handsome Family and local hero John Blek the headline acts all played two shows so with a bit of juggling you can see all of them. However such were the draws of the Free Trail I missed Holly MacVe, David Kitt, Joan Shelley, Arborist, John Blek and Mr. Taylor, the last my one real regret of the weekend. Reports from those who attended these shows were all positive, dissections and song by song accounts of all gigs shared over a pint or two on one or two (or more) occasions. Of those we did see, well, the opportunity to catch such performers in such intimate settings is to be savoured. The Handsome Family were in the seated Watergate Theatre but the rest were in pubs with the audience pressed up close. At times close and respectfully silent as when Carter Sampson (with guitarist BJ Baartman) wowed us with her Okie tales, at others close and boisterous as when the fiery Marah abandoned the stage and marched, still playing, percussion and all, into the audience. The Americans, a new signing to Loose Records showed promise at a packed and very hot Cleeres bar and Paul Cauthen proved to be as intense in a solo setting as on his album, My Gospel.

Highlights of the weekend for me were the tremendously charismatic Yola Carter, the AMA UK’s UK Artist of the Year who turned her show at Kytler’s into one huge party, beaming from the stage as she and her band pumped out songs from her current EP and her forthcoming album with the energy and fire of a Stax roadshow. Her encore of Townes Van Zandt’s Loretta and The Band’s The Weight provoked a frenzied response. Western Centuries, initially a country rock vehicle for Cahalen Morrison (of Cahalen Morrison & Eli West) proved to be as much a showcase for the other two singer/writers, Jim Miller and Ethan Lawton who have joined Morrison in the enterprise. With the three of them taking turns on vocals (and Morrison and Lawton alternating on the drum stool) the trio were a hoot, their camaraderie and banter at times hilarious while their songs were rock solid. Country rock, Western swing and honky tonk influences were well to the fore as they sang about drinking and women and more drinking. Salutes to various nectars along with warnings about its destructive powers fuelled songs such as In My Cups and Off The Shelf. With tremendous playing on double bass from Travis Stuart and pedal steel by Leo Grassl the band played for over two hours, apparently the longest set of the festival’s 20 years before winding up with Tonight The Bottle Let Me Down.

The Handsome Family’s show at The Watergate Theatre was the most formal event of the weekend. The fully seated auditorium was a nice opportunity to take the weight off of your feet and wallow in the Sparks’ dark humour while Brett and Ronnie took the opportunity to recall previous appearances when they were the ones playing in the pub back rooms. Towards the end of a lengthy tour they were not as exuberant as they had been when I saw them several weeks back but their dark and delicious take on weird Americana delighted as always while the pair continue to bicker on stage wonderfully.

Andrew Combs closed the festival on the Monday evening buoyed up by ecstatic reports from his Sunday afternoon slot and of course his latest album, the towering Canyons Of My Mind. The album finds Combs refining his mid sixties Nashville influences and adding a punchier edge along with an environmental awareness and tonight he delivered several songs from the album with a fine sense of melodrama as he and his three piece band managed with ease the recorded arrangements while also rocking out on occasion. The opening Rose Coloured Blues was straight out of Jimmy Webb territory but any thoughts of an evening of very pleasing country pop numbers was blown out of the water by the stark and evocative Dirty Rain. All These Dreams was enlivened with some tasty guitar licks and Lauralee did have the power and passion of Roy Orbison with whom Combs has often been compared to. Better ways (dedicated to his wife) was a dreamlike swoon but Bloodhunter and Heart Of Wonder were pumped full of awe with the guitars swelling on the latter and the closing Bourgeois King was an apocalyptic premonition with the band squalling in all directions. A solo encore of Hazel was the antidote to this bile as Combs’ wonderful voice rang out on this supreme distillation of lonesome love songs.

And in between of course was The Free Trail. In the main undocumented here as there’s only so much note taking one can do while carrying several pints but we did get to see Peter Bruntnell and his band delve into guitar blasted heaven on two occasions with local guitar hero Clive Barnes joining him on stage at a late night show (Barnes also guested on guitar on the two shows by Marah). James Walbourne’s Mother’s Little helpers mashed up some rockabilly and retro rock  and serious guitar shredding while local rockabilly band TV Jones & The Tomahawks were a rip roaring success even though we heard most of their Saturday night set while craning our neck’s around the front entrance of the bar they were playing in.

The find of the weekend was Austrian country band, Prinz Grizzley who made the lonesome trek to Kilkenny and found themselves immediately adopted into the family. With an EP, Wide Open Country, under their belt the band, led by the laconic Chris Comper, wowed several audiences with their classic country rock sound with Comper’s agile voice impressive while his song writing is well up to par. Expect to hear more from them soon as several industry folk were quite impressed.

Finally, there was an unscheduled appearance on the Monday afternoon from two Irish troubadours. Dublin’s Matt McGinn impressed with several songs from his album Latter Day Sinner while apologising to the Scots’ folk in the audience that he wasn’t THE Matt Mcginn. Stevie Scullion AKA Malojian who was a hit at last year’s festival played a short set which hinted at some wonders to come from his new album produced by Steve Albini and which sounds very intriguing.

That about wraps it up although it isn’t the half of it. Suffice to say that aside from having “the happiest little record shop in the world” in the form of Rollercoaster Records which sold the tickets and hosted several in store appearances over the weekend Kilkenny Roots may be the happiest little festival in the world. It’s a community, a family of music loving friends who will welcome you in and as such it’s hopefully appropriate here to note that three members of the community who have been stalwarts of the festival were either unable to attend or had their involvement curtailed due to illness. The fact that their absence was not only sorely missed by all attending but was also remarked upon by several of the acts is testament to the close-knit feel of this weekend. They and the whole Kilkenny Roots family know who they are and hopefully all the good wishes and warm vibes sent out over the weekend contribute to their well being.