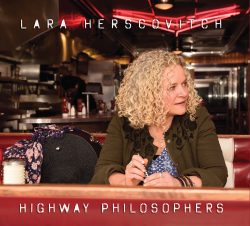 The themes Lara Herscovitch covers in her songs are broad to say the least; they range from (literal and figurative) small things like caterpillar racing and tire pressure, to loftier topics such as the meaning of life and climate change. But with decades of humanitarian work across the globe in a broad range of fields under her belt, it’s no wonder she has such an interesting take on the world around her; and while she’s not reinventing the wheel, there is plenty in this set of vibrant songs to get excited about.

Throughout, the tone is traditionally folkish, in the vein of the great Emmylou Harris and her contemporaries. Herscovitch’s voice is a pleasure to listen to, bright and clear as a bell, sometimes belying the darker issues she’s singing about.

‘Now Here This’ comes through the speakers eerie and echoing before a “1, 2, 3, 4” counts us in and things start to get more melodic. The lyrics, about finding refuge in beauty where you can, are full of sharp rhymes with some beautiful imagery (“We can glitter, we can shine / Swallow tails on the telephone line / Waiting for the call to arrive with this, now, here”). ‘Angels’ takes a more upbeat tone and is optimistic for change: “Midnight parking lot, drink up / PBR in a paper cup / Shooting satellite, you say this night will change our luck”. The album’s title track follows the common theme of troubadours living their lives on the road, but it feels fresh enough that it might well be a new story to your ears, in large part due to some well crafted and memorable lyrics (“I drew a compass on my skin so when any fog rolls in / I know precisely where to begin”). ‘Careful Porcelain Doll’ has jazzy, surf rock undertones, which works well given the lyrics are about feeling like an outsider and doing things your own way (“What life is asking, never time to rehearse / I sprinted into the nearest brick wall / To break all remaining careful porcelain doll”).

‘You USA’ is the clear standout from the album: it takes aim at the current policies of leadership in America in reference to immigration (“In the land of the free, full of cages and locks”), but throws even more cutting barbs at the lack of commitment to climate change (“River’s rising, they don’t care / Gonna climb aboard a rocket and leave us there”) and insists that there are people willing to stay the course and fight the power (“We are underestimated, undeterred, here to stay / Pins in the rafters from the rally yesterday”). A few tracks later on ‘Rise’, Herscovitch talks of an incompetent emperor, and you can’t help but draw obvious parallels to the current president of the United States (“The emperor’s just what he seems / Standing by all the lies he believes” and “The emperor’s clear he just doesn’t care / About you, about me, ‘cause we’re “them”, over there”). ‘Sailing to Newfoundland’ is ostensibly about pilgrims historically trying to settle on the Canadian island, but it’s hard not to think of the plight of modern day refugees too (“Signal lap lit, stars are alright / The future breaks open just like the green and golden sky”).

‘Fault Lines’ – next to the doomed holiday romance of ‘Castle Walls’ and the running away with the circus theme that makes up ‘The Tiger and I’ – is some of the most straightforward storytelling on the album. It charts a less than happy holiday (“Station wagon silence ‘cause there’s way too much to say / Maybe they knew to speak it was to notice there’s no way / No way home from the campground, propane cookstove, sun-fish lake”) and even some of the aftermath (“Now tonight he’s sleeping soundly on the sofa pullout bed / I’m down the hall dreaming next to the dog instead”).

‘Shine Sister Shine’ has Herscovitch singing of someone wanting to change their life but feeling frustrated with the lack of opportunities (“Thought she’d start a new career, get some interviews / The clouds always covered her, eclipses too”), only to have them realise what they do is very valuable in itself; a positive turn which become further impactful thanks to some lovely background harmonies. ‘In Your Corner’ cleverly uses boxing metaphors for having someone’s back, while the acoustic ‘Wingspan’ has a touching message of personal and professional growth. ‘From a Dream’, the final track, is a mix of the traditional songs ‘Dona Nobis Pacem’ and ‘Auld Lang Syne’ along with Herscovitch’s own words, which she presents in a spoken word style, giving it all a thoroughly modern feel.

When you leave this album, you really do feel richer for getting to hear Herscovitch’s stories and statements, so here’s hoping her travels aren’t over yet and that she has plenty more from where that came from.