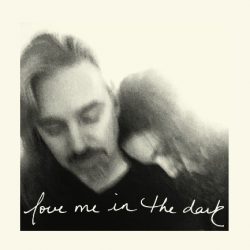 Love Me In The Dark comprises of Steve McCormick and Heather Donavon, the two having met on stage five years ago in Venice, CA., each having had their own individual careers as songwriter/artists. This self-produced and released album is their first as a duo, but it has a maturity which reflects the closeness of their musical and personal bonds.

The album is characterized by fine harmonies, songs often featuring unison vocals throughout, with McCormick and Donavon’s voices blending beautifully, in the manner of the fine collaboration of Billy Joe Armstrong and Norah Jones on ‘Foreverly‘, especially on the album’s opening track ‘Old Soul‘, a must-listen.

Original songwriting is strong throughout, ‘Circle Up The Wagons‘ came from the experience of supporting Donavon’s father after his diagnosis with Stage Four Non-Hodgkin’s Lymphoma and subsequent treatment. The metaphor expressed in the memorable chorus “Circle up the wagons pronto/ circle up the wagons now/there ain’t no way we’ll see another day/unless we circle up right now” is carried through the song with feeling and precision, reflecting fine crafting.

Where songs feature either McCormick or Donavon on lead vocals, the harmonies return on the chorus, as on ‘Circle Up The Wagons‘ featuring McCormick, and ‘Heart Attack‘ featuring Donavon, the latter with a clever lyrical take on the song’s title, the attack being on her heart, by a new love.

‘Move like Africa‘ is another outstanding track, the combination of unison vocals and lazy slide creating a dreamy mood, “love me in the dark/see me through dusty eyes” setting the scene for the African metaphor.

There is still room within the album for a shift to Donavon’s solo style, in the album’s closing track ‘Runs Deep‘, with a strong gospel feel in vocal styling and lyrics, while the arrangement is slow-paced and moody, creating a haunting atmosphere.

Production by Steve McCormick is of a high standard – the album was engineered by Johnnie Burik, recorded at Shangri La Studios and  Jackson Browne’s Groovemasters Studios, and recorded, engineered and mixed at Steve McCormick’s Studebaker Sound in Mar Vista, CA.