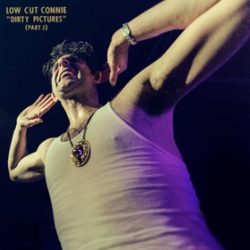 Philadelphia six-piece Low Cut Connie return with the second of their ‘Dirty Pictures’ records. Where the first primarily centred on the nitty-gritty rock and roll they have become renowned for, this latest instalment is a far more uplifting experience, while still focusing on the unique, oddball characters which they have an incredible knack of exposing through their songs.

The band travelled to Memphis to record the album, and the city has clearly had an influence on the sound. However, this is still a distinctly classic Low Cut Connie record, with the band sticking to what they do best. Beginning with the dark, bluesy stomp of ‘All These Kids Are Way Too High,’ they pick up where Part 1 left off, with the trademark swagger their fans will now be accustomed to. Recent single ‘Beverly’ is bona dude Low Cut Connie, and may well have established itself as their signature tune. An uplifting ode to the lonely existence of its namesake, vocalist Adam Weiner sings “you’re slipping away, sit around a trailer and sleep all day”. Without glamourising tragedy, the sextet manage to capture the essence that even a life without glitz can still be lived with inner spirit and inspiration.

The highlight of the record comes in “Oh Suzanne,” which recalls Elton John (who, incidentally, is as a fan of the band) at his most rocking. Clocking in at under two and a half minutes, guitar solos fly everywhere, following the pounding lead of Shondra – frontman Weiner’s affectionately-named $100 junk piano. Shondra takes a back seat on ‘Please Do Not Come Home’ with stratospheric guitars taking the forefront, the likes of which would make the E Street Band red with envy as Weiner sings of a lost love, pining “I tell myself time and again, this ain’t a way to live”.

As the album, filled largely with stadium-sized anthems, comes to a close, it does so in anti-climactic fashion. Despite its heart being in all the right places, ‘Desegregation’ plods along with no sonic purpose before ‘Hey! Little Child’ closes the record on a damp squib, with an aimless foot-stomper.

Releasing ‘Dirty Pictures’ over two records is an ambitious move from Low Cut Connie. On this, the second of the releases, it feels like a wasted opportunity as an excellent first half is spoiled by a weak, meandering finish.