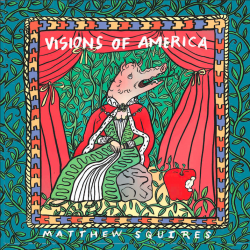 As the world continues to pick up pace and we struggle not to be left behind, it’s sometimes almost panic inducing to contemplate the impossibility of listening to all the new music available. Artists also have to clamour for attention, the ‘back in the day’ ritual of flicking through album covers in the local record shop having long been replaced by the casual thumb-flick-scroll through playlists. What makes us stop and play? For an artist like Matthew Squires, noting that ‘no one buys CDs anymore’ putting out material has ceased to be a physical thing (he will DIY burn you a copy if you want, and don’t mind it not being shrink-wrapped). He doesn’t make much money from his albums of course and he doesn’t see that as a problem until he wants to make a new one. ‘Visons of America’ comes to fruition as a self-released, crowd-funded effort. This is music as co-production, a community of artist and supporters and, as a small measure, the Americana UK pages as part of that to offer sign-posting in the increasingly crowded music digitalverse.

So why should we break the scrolling and press play for ‘Visions of America’? Because of all of the above, because it is really good and because it is a little different. The album publicity tells us that Squires has toned down his more idiosyncratic outlook of his previous outputs for a more traditional path. Since 2010 Squires has released seven albums with the last of them three years ago. In the gap, as well as raising the funds for this album and writing songs, Squires has spent time in a monastic Buddhist community. Little wonder then that Shiva makes an appearance in the lyrics. But then again so do many other references; can you think of an album that has a song starting with a line like “Lincoln, and Hitler and Donald Duck walk into a bar”? Although this line appears on ‘Joke Song’, the joke is not humour, its absurdity.

This record sets out to challenge and yet in many ways it is not that different. The basic ingredients are there – drums, guitars, lap-steel, ‘Lonesome’ could sit on many an album But this will appeal if you prefer your music when the best pigeon-hole is ‘Other’. Squires’ differentiation comes first in his commentary. He doesn’t like to think of himself as a political voice and yet acknowledges that, much like so many other artists, he is informed by these strange times. Squires’ approach is to look for the spiritual connectiveness of the times. His points are made through juggling the mundane and the possible  – “I have spoken with the one called Jesus of Nazareth/ Never have I met a man so deserving of his myth”  he tells us on ‘Perfect Eye’: “Maybe this busted dry wall could be Heaven’s door”.

His further distinction is to meld his musical style into a familiarity that is enough to comfort while avoiding cliches. Bits of ‘Strange Day’ come close to Alabama Shakes but elsewhere the record is a touch more anarchic. Squires has a singular voice firing these tunes along. At times he has a keening Neil Young like edge to his delivery. Other times it is more like Gordon Gano of the Violent Femmes and it is then that the music can approach an edge-of-control punkish folk. Other times his higher register guides more ethereal phrasing into Grandaddy territory. The sum of this is that there really is something new to hear on every listen, proving that pause and press play when you hit ‘Matthew Squires’ won’t leave you disappointed.

Evocative, intriguing and clever - add this one to your playlist