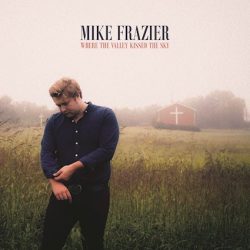 Mike Frazier hails from the Shenandoah Valley in Virginia and it’s this region that informs and infuses his new album ‘Where The Valley Kissed The Sky’, with the singer/songwriter drawing on his observations -living and working in and around various towns in the valley.

The Shenandoah Valley is, apparently, an area that encompasses a range of communities from college towns to rural farms and is, by all accounts, a region that has experienced a lot of rapid cultural and economic upheaval in recent years and it’s this that provides a loose concept for Frazier’s songs; a concept that serves the album well.
It’s clearly a region that’s seen its fair share of difficulties, if Frazier’s songs are anything to go by. “You wonder why the mines went dry when your father made his way. No work or money for you now the needle takes the pain and they’re the ones to blame” from album opener ‘Southern Decay’ and there’s plenty more where that came from.

Frazier paints a depressing picture of run down communities dominated by tradition and lack of money and opportunity, with just the occasional glimpses of something more promising, whether that be love, as in the track ‘Lilac Glow’ – “So find me now southern bound off of Water Street, Your liliac glow always shows when I need it most. I’m better off here I know” – or the realisation of a better life, as in the closing track, ‘Farewell Annie’ and its recognition that life can change and that we all have the ability to turn around our fortunes and those of our family – “Found faith in your own worth now you finally have grown, you’re raising your kids better than you could have ever known”.

In general, these are good songs – but we’ve heard it all before. It wouldn’t be unreasonable to compare this album to Springsteen’s ‘Ghost of Tom Hoad’; or to any other number of similar albums and songs looking to address the downside of the American Dream. Frazier writes a decent song and delivers those songs well but there is a constant feeling of deja vu. The songs are well written, but they’re not outstanding songs and they really don’t raise themselves up above the mountain of similar material washing around in the Alt Country/Folk Rock/Americana universe. And some of Frazier’s influences are worn too heavily on his sleeve – he openly talks of CSN&Y as being an influence and tracks like ‘Wedding Day’, with its harmonica led intro, sound almost like a Neil Young cover track rather than a subtly influenced original.

Mike Frazier is a good artist and the album has a lot going for it, not least some excellent musicianship from the band assembled here and some great production from Erik Romero but, ultimately, the music lacks originality and the ability to stand out from the herd.

Solid enough collection of songs but lacking in originality