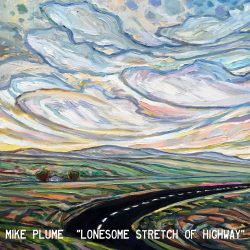 Mike Plume “is a true alt-country legend in Canada, with a dozen releases since his debut in 1993,” according to his press. Having not encountered him before ‘Lonesome Stretch Of Highway’ comes as a pleasant discovery from the country end of Americana. The album hits its stride on the third song ‘Perfume and Gasoline’ a mandolin and violin driven ballad with an uncredited female singer adding to the mix.

‘Younger Than We Are Today’ is the best song on the album and the hardest rocking as well. Plume does a decent ballad as well, ‘In God’s Hands Now‘ which has a gospel feel to it and closer ‘That’s What I’m Talkin’ About’ which repeats the “Way Down Yonder Is a Little Piece of Land” theme of the brief opening piece. Instrumentation is mostly spare and acoustic. The accordion on the slower songs gives a flavour of Cowboy Junkies, and the Dobro that features in many of the songs is probably what prompted Levon Helm, with whom Plume worked, to remark I can sure hear that western wind in y’all’s music.” A couple of the songs, notably opener ‘I’m Your Huckleberry’ don’t quite match up but overall the songs are original but have that familiar feel of the best writing.

On his website Plume has some videos telling stories from his career writing in Nashville, the most recent is about Guy Clark, and Clark, along with Springsteen at his grittiest are good comparisons for Plume’s voice. While the album is firmly in the country camp it never drifts into the blandness of most modern country music. ‘It’s A Long Way’ which features Canadian country-rock band The Road Hammers is a nostalgic sounding piece that would have been a hit in the 80s. Lonesome Stretch Of Highway is not the most contemporary sounding album that AUK will feature this year, but is all the better for that.