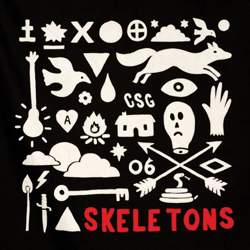 There’s a rather sweet tale behind this album which involves Al Murphy, AKA Murphykid, retreating, wounded following a broke down love affair, to a garden shed in order to pour his heart out to an eight-track recorder. This all  happened back in 2004, just before Bon Iver carved out a career from a similar move but Murphy’s tapes languished in his sister’s attic as he went on to become a successful illustrator. Noting some interest in these old recordings Murphy retrieved them and after some spit and polish (in the form of additional studio embellishments), he now unveils his 14-year-old heartbreak for all to hear.

A Yorkshire lad, much is made of Murphy’s stoical approach to his breakup, allied with a northern self-deprecating humour, in the publicity blurb, but essentially the album is a fairly good slice of introverted soul searching with guitars rippling away over occasionally dramatic percussion. Murphy’s voice is closely miked, almost a whisper at times with some of the songs capturing a wistful and autumnal feeling as on ‘Listen To Me In Your Heart’. It’s like an odd mix of Roy Harper and Clifford T Ward at times with a bucolic English folk element which is melodic indeed but ultimately with Ward winning out over Harper’s more barbed take.

While a song such as ‘The Pact’ has a claustrophobic cavern like sound and ‘Seasons Change’ utilises a forlorn piano to emphasise his hurt the album suffers from a sameness, a lack of variety which ultimately reminds one that this is essentially one guy in a garden hut licking his wounds and crying his heart out. He does however come across almost as a Yorkshire equivalent of Leonard Cohen as he mournfully sings the lines, “We stayed much too late, the last night bus drifts away, a million miles from home, we are all alone, all but lost” on the haunting closing song, ‘We Are All But Lost’. An album for bedroom romantics then.